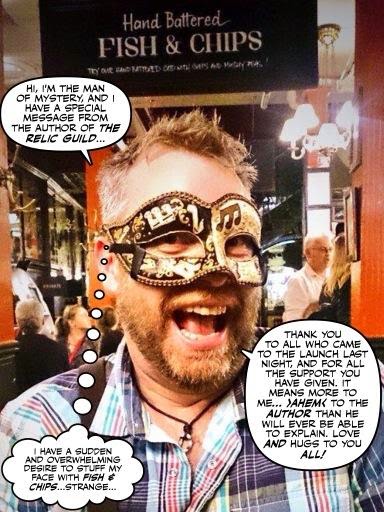 There’s no way on earth I could narrow down the 2,000 or so people I’m following on Twitter to a top twenty, so this definitely ISN’T intended to be one! However with so many people saying to me that they get confused by Twitter or that they’re encouraged to be on there but don’t know what to say, I thought I’d point out some examples of authors using it really well.


Dahlia Adler – Warning – following Dahlia is seriously bad for your bank balance; she regularly tweets recommendations and links to her fab posts for Barnes and Noble recommending even more awesomeness. While I'd normally avoid leading with someone who will utterly destroy your savings account, a) it's in alphabetical order and b) she'd be top anyway. The best taste in book of anyone I've ever known, and an outstanding champion of diverse books - I love her QUILTBAG compendium.

Sarah Benwell – I think the excitement over The Last Leaves Falling is incredible; partly that’s because a few lucky early readers have been singing its praises, which always helps – especially when they’re people like @Charlieinabook with fabulous taste. However I think it’s also tied into Sarah’s love for YA in general and diverse books in particular, which shines through every tweet – I can’t imagine her book being anything less than brilliant.

Nick Bryan - I think that as a self-published author it's even harder to strike the balance of promoting yourself without spamming people than it is for those with publishing houses behind them - at least if you've got a traditional publisher you can rely on them to do some of the publicity. Nick juggles this really well, talking about his writing of the webserial Hobson & Choi, which he's now releasing as a series of self-published books, rather than just spamming buy links to it. (Also, and this is where so many other people seem to not 'get' Twitter, he talks about a lot of other stuff as well!) The first of his books, containing the first 33 chapters, is available now, and the sequel is coming soon.

Nicole Burstein - Former blogger and 2015 debut author, with the Andersen-published Othergirl coming out in a few months time. Nicole is an ex-blogger and formerly ran the children's/YA department at Waterstones Piccadilly - she REALLY knows her stuff when it comes to books, as you'd imagine! She's also really vocal about libraries - and goodness knows, everyone should be these days! Like many others on this list, I know her offline and she's equally fab there.

Edward Cox – Possibly the most enthusiastic person on Twitter. Proof that self-promotion can be not just non-annoying but actually fun to read if done in an incredibly entertaining way, with fab photos and captions galore. (People who've met him may feel that The Man Of Mystery in the photo at the top of this post looks eerily familiar...) Of course, it helps that self-promotion is a small part of his output; he’s a tireless champion of other SFF authors and a hugely fun person to talk to as well.

Kim Curran – Kim is always fab to talk to, but wanted to mention her superb use of Twitter with the #glazechat hashtag to engage readers in a Twitter chat to publicise her summer release. Working with brilliant PR Faye Rogers, it was probably the highlight of one of the best blog tours I’ve seen. Great stuff!

James Dawson – Love the successful #boyqueen campaign in particular, which saw JD named Queen of Teen 2014, and James’s excellent work on raising awareness of LGBT* issues. He also tweets links to his fab blog posts, like this one about why he charges for school visits.

Abi Elphinstone – Warning; following Abi can be seriously jealousy-inducing as she has EVERYTHING. Fab website, holiday trip to Burma, writing shed… oh, and a really good MG adventure which had a beautiful cover revealed today! (Or possibly three weeks ago last Friday, depending how long this post takes me to write. Edit: Oh, that was EERILY close...) She deserves it all, though, as she’s completely lovely and her book rocks. Second edit: Also, since I wrote this, she managed to get an in-person interview with Cary Elwes, making fans of The Princess Bride even MORE jealous!!

Katherine Locke - I am nearly dying of anticipation waiting for Second Position, which comes out next year from Carina. Her tweets tend to be about ballet, cats and writing. Whatever the topic, she's open, entertaining, and always lovely. Also her conversations with Dahlia Adler frequently make me laugh out loud. Oh, and GREAT bio - the word 'distractypus' is my new favourite!

Zoe Marriott - Always brilliant to talk to and hugely supportive of bloggers, Zoe’s live tweets of TV shows are some of the funniest things I’ve ever read. I miss Merlin even more because of the extra entertainment her commentary provided!

Molli Moran - Molli likes, and tweets about, basically everything I like - country music, Doctor Who, diverse books, Gilmore Girls... Interviewing her the other week was fantastic because of this. I love her conversations with Katherine and Dahlia, as well. (I should point out I join in these conversations when I have something to say; I'm worried it sounds like I sit here stalking them.) Also One Song Away, her gorgeous NA novel, comes out tomorrow - yay!

Non Pratt – Non’s taste in books is pretty much unrivalled in the UK, and she’s hugely enthusiastic over a lot of the same books and people that I am, which is rather awesome. She's also one of the nicest people I've met both on, and offline.

Andy Robb – Andy is possibly the nicest and most laid-back guy I’ve ever met. (As long as no-one mentions The Big Bang Theory, anyway.) His personality comes across brilliantly on Twitter, where he has the same sense of humour that makes his Geekhood books so much fun to read.

Melinda Salisbury – I’m trying to do brief descriptions here; I don’t think I can do justice to Mel in a paragraph, though. Follow the author of the amazing The Sin Eater’s Daughter for an often educating, very often terrifying, but always entertaining ride. (Also worth mentioning Mel’s agent Claire Wilson and fellow Claire’s Coven members Alexia Casale, Lauren James, Tom Easton, Gary Meehan, Alice Oseman, Sara Barnard and Catherine Doyle; the discussions between them quite frequently make me laugh like a drain. And make me feel sorry for Claire!!

Samantha Shannon - Samantha's #BritishAlphabet hashtag - currently on a break as I think she's on a deadline - is brilliant, explaining British slang and unfamiliar words to people who may not have come across them before. She is also the best person I've ever seen at live-tweeting events, which is staggeringly difficult but she makes it look easy. (As does @charlieinabook, sneaking in a plug for a blogger!)

Holly Smale – Clearly, the partial list of what it means when someone favourites your tweet (983 favourites and 1.1k retweets in a week!) would be enough to get Holly on this list by itself. Apart from that, I love her enthusiasm; she’s always completely delighted to hear from Geek Girl fans, and her wide range of interests are fun to read about.

Keris Stainton - Keris's bio says she's been on Twitter 'since it was all fields', and I've known her longer than anyone else on this list, I think - I've been talking to her since the start of 2012 (again, seems longer!) and met her in person later that year after she invited me to the fab Emma Hearts LA launch. She is an incredible champion of UKYA, co-running the UKYA site with fellow fab authors Keren David and Susie Day, and also co-organised the YALC Fringe earlier this year with the fabulous Sophia Bennett. She's incredibly friendly and supportive, and is one of the nicest people I've met, on or offline. (Although warning: there IS a lot of Harry Styles on her feed these days!)

Robin Stevens - Offline Robin has been incredibly supportive of @MeetUKYA stuff; online she's an engaging voice who deserves all the plaudits Murder Most Unladylike is getting. She's also hugely knowledgeable about MG and loves to spread the word about brilliant books!

Louie Stowell - I only met Louie in person back in March, I think, after Non's Trouble launch. I'd been talking to her on Twitter for about eighteen months at that point but it felt like I'd known her forever; she is incredibly easy to talk to, and supportive, both on and offline. She's also become my co-organiser of @MeetUKYA, which is rather wonderful, because between us we seem to muddle through and sort out some fun events.

Lisa Williamson - She's awesome, she's great fun, she stars in the John Lewis Christmas ad. The only way anyone could be better than that is if they'd written the best book of 2015. Wait a minute... SHE HAS! (Disclaimer: I haven't yet read EVERY book published in 2015, despite making serious puppy dog-eyes to a lot of publishers, so it's possible that there will be better books than The Art Of Being Normal released next year. Just not likely.)

In addition to the fabulous authors you can find on Twitter, there’s also some brilliant hashtags you should definitely be checking out! Miriam Craig and Lorraine Gregory’s #ukmgchat, which runs twice a month (I think that’s right) on Wednesdays, and Lucy The Reader’s #ukyachat, which runs at various times and dates, are brilliant ways to meet new people and get excellent book recs, while LH Johnson’s #kidbkgrp is a fascinating monthly discussion of topics in children’s and YA literature.

Who else is a must-follow on Twitter? Let me know in the comments!