One of my favourite NA reads for ages has been One Song Away, Molli Moran's engaging story of a country singer moving back home to her small town after struggling in Nashville, and asking her childhood best friend to pretend to be her boyfriend to stop her mother from trying to set her up with anyone else. It's a fun read with a great setting and a brilliant pair of main characters - I was thrilled to get the chance to ask Molli some questions about it. 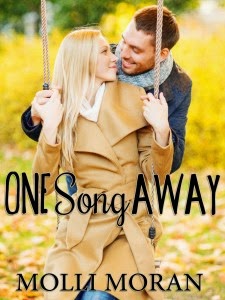 1. When you close your eyes and picture your readers, what do you see?

What a wonderful question. I see people who love to read, people ranging in age from late teen years to adults. Since I write stories set mainly in the US South, I hope some of my readers are Southerners themselves, but mostly, I see people who love sweet stories with messages about friendship, self-love, and finding who you are.

2. I loved the incredible chemistry between Sophie-Claire and Jake! Who's your favourite romantic fictional couple?

Thank you! I could never limit to just one, but a few of my favorite fictional pairings are: Jamie Fraser and Claire Randall from Diana Gabaldon's Outlander series, Daemon Sadi and Jaenelle from Anne Bishop's Black Jewels trilogy, Rose and Dimitri from Richelle Mead's Vampire Academy series, and of course, Ron and Hermione from the Harry Potter series. (I could talk pairings for days, so I tried to limit myself here. Heh.)

3. Despite this chemistry, it's one of the less explicit NA novels I've read, making a refreshing change. NA is still a relatively new age category and I still see people who don't really get the idea. If asked to describe NA in a sentence (or paragraph), what would you say?

Again, thank you! I agree that NA is such a new category, and it's still in flux. New Adult to me are books that should capture the sense of knowing you're an adult, but not yet being totally sure of what that means. New Adults are working their first jobs or careers, maybe they're in college, maybe not - but their lives are constantly changing. They're having new experiences, and while sometimes that can be dating or even a serious romance, it's also so much more. I want to see New Adult books about characters discovering their sexuality (all kinds, please), or new hobbies, working, really having the time of their lives discovering who they are. Let's include romance and sex, but let's not limit New Adult books *to* sex.

4. As a huge fan of country who grew up listening to Willie Nelson and Kris Kristofferson, I'm desperate to know what, if anything, you listened to while writing the book! Can you share a few songs that got you in the mood?

I can! I'll be sharing the full playlist during my blog tour in December, but I can give a sneak peek now. A few of the most often-played songs on my One Song Away playlist are: "A Little Bit Stronger" by Sara Evans, "American Honey" by Lady Antebellum, "Don't Forget to Remember Me" by Carrie Underwood, and "F**kin Perfect" by Pink

5. Which six country artists would you most like to see live? (Feel free to imagine a time machine is involved to travel back to people's primes!)

Oh wow, so many. I'd love to see Chris Young live, because his albums have inspired me SO much in the last few years, made me laugh and cry. I'd love to have been around to see Patsy Cline in concert, and I'd love to see Reba before she retires, because she was the first country artist I ever listened to. I grew up from then on listening to her albums, and loved her show Reba. I've seen my idols, Rascal Flatts, three times, and I've also seen Jason Aldean, Blake Shelton, Lady Antebellum, the Eli Young Band, Darius Rucker, and Thompson Square, but there are so many I still want to see, like Taylor Swift, Miranda Lambert, Cassadee Pope, and Luke Bryan.

6. Speaking of time travel, I know you're a huge fan of Doctor Who. Favourite Doctor, and why?

I am! Doctor Who is really my favorite show. I saw it for the first time in 2006 and just fell in love. So far, my favorite Doctor is David Tennant's Tenth Doctor. "Why" is probably an essay length response, so I'll keep it short. He is my hero. He embodies all the qualities of the Doctor that I love (wonder at all life forms, bravery, belief in humans above all else) but he was a little more healed and a bit more human than the Ninth Doctor. We went on so many adventures, we got to see Ten fall in love, and it was all so brilliant.

7. And like myself, you're a big supporter of the wonderful #WeNeedDiverseBooks campaign. What three diverse books would you love to see in every classroom or school library?

I strongly believe in #WeNeedDiverseBooks. I would LOVE to see Tess Sharpe's FAR FROM YOU, Nina LaCour's EVERYTHING LEADS TO YOU, and Jodi Lyn Anderson's TIGER LILY in all libraries, for starters. I think the next few years are going to hold so many wonderfully diverse books.

8. Also like myself, you're a fan of Gilmore Girls. Which of Rory's love interests do you think was most suited to her?

You so know how to ask the hard questions. LOL. I loved Dean, because he was Rory's first love, but like a lot of first loves, Rory had to move on because she'd matured. Ultimately I'm a Jess/Rory girl. Jess challenged and pushed Rory, and made her unafraid to push back in a good way. They really connected on a deep level, and dare I say, they made each other better by loving one another.

9. What's next for Molli Moran?

I'm working on a novella now for my Walker Boys series called AS WE FALL TOGETHER, and also about to start the first companion book in that series, AS YOU BREATHE AGAIN. Then next year, I'll be working on a companion to ONE SONG AWAY, from the POV of Sloane Delgado, one of the supporting characters in ONE SONG AWAY.

Thanks so much for talking to me, Molli!