Blog Tour: The Evolution of Sarah Midnight by Daniela Sacerdoti

The Sarah Midnight trilogy by Daniela Sacerdoti from Black and White Publishing is one of my favourite paranormal series, so I'm really pleased to welcome Dani to the blog today to kick off her new blog tour for the closing novel in the sequence, Spirit! 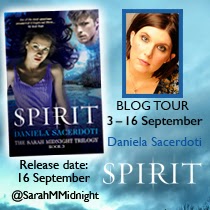 Like all genres, Paranormal Young Adult books have their rules and their clichés. Each writer negotiates her way among them, to stay true to the genre and to themselves at the same time. When I started writing The Sarah Midnight trilogy, I hadn’t read any YA written by contemporary authors – unless you consider the last Harry Potter books as YA. I was also not on social media as such, so I really didn’t have much of an idea as to what YA was all about: all I knew was that I had a story and I wanted to tell it.

My Sarah was a vulnerable heroine, unaware of her own powers and not ready to fight. She was not, in any way, ‘kick-ass’. In making her so, I had unwittingly distanced myself from many other YAs, where the heroine was a ready-made fighter, strong, courageous and ready to take the world on the chin. This is often seen as a better role model for young women than a vulnerable protagonist who hasn’t found her feet. By making Sarah fragile in the first book of the series, I attracted some criticism – but to me, it was the only way to stay true to her character. Sean says of her that she’s like a ‘rose dipped in steel’ – and this sums her up. She’s not a natural fighter, but she doesn’t realise how much strength and power she has inside her until she finds herself in danger. Also, she’s been traumatised by many years of horrific visions, which she had suffered every night from her thirteenth birthday onwards, and this has left deep scars in her psyche.

At the beginning of the story, she relies heavily on Sean for support – he’s the one who knows about the world she’s been thrown into, while she’s been kept in the dark about her legacy. Sean is the bridge between what she knows, and the mystery of the Secret Families. But as the tale unfolds, Sarah looks deeper into herself – and her vulnerability turns into a harder, tougher shell as she gains control over her powers. She learns more about her family and her past, including the secrets that have been kept from her by her parents and which now dominates her present.

In the last book, Spirit, Sarah has become a fully-fledged fighter – not unafraid, but resistant to fear. She’s more confident in her own abilities and aware of her gifts. Now she’s facing another risk, which is to become too hard and lose her natural empathy. She goes from irritating Sean because she tries to speak to the demons and avoid fighting – to being close to cold-hearted killer in many situations. Sarah’s challenge in Spirit is to stay true to her heart, instead of hardening it beyond the reach of her softer soul. My Sarah is a young woman who grows into herself and is tempered like metal in water – I couldn’t help loving her and rooting for her, and wanting to see her dreams come true, I hope her readers will too.