I tend to avoid blog tours unless they're for books I really like, but the opportunity to do several fab ones recently has been too good to resist! Hugely pleased to welcome one of my favourite guest posters, Sophia Bennett, to talk about her wonderful new book The Castle. 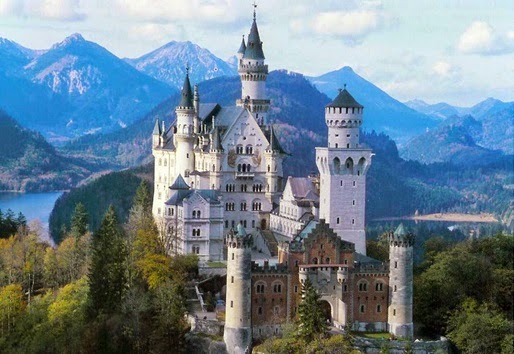 (Neuschwanstein, Bavaria)
When I came to write my first adventure story, I always knew there would be a castle in it, and that the heroine’s quest would lead her there. I pictured it being on the south coast of England, which is scattered with forts and castles from the days when the French seemed about to invade at any minute. My editor, however, suggested it should be somewhere more exotic. 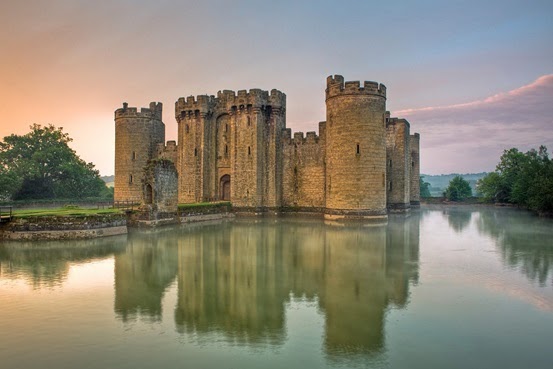 (Bodiam, Kent)
So I looked elsewhere. I considered Scotland for a long time. Not super-exotic, I know, but this book was partly inspired by my father and he grew up there, and I was thinking a lot about The 39 Steps, which is set in the Highlands. I wanted there to be an ice house in the grounds – which is what the aristocracy used before fridges came along – and I had a crucial scene all set up in one, ready to go.

(Fyvie, Scotland)
Meanwhile, I was also looking at castles in the Loire valley in France, where I used to be a tour guide for American students while I was at university. These riverside palaces are magnificent. Huge and romantic, with the Loire river floating graciously past, and Three Musketeers-type sweeping staircases and long galleries wherever you look. 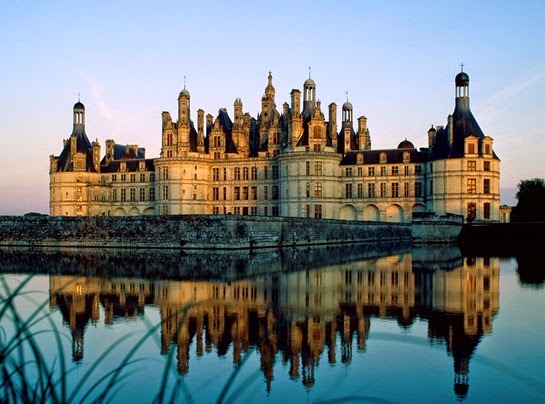 (Chambord, Loire)
Then the weather in England just got worse and worse, and it rained ALL THE TIME and I got so fed up I decided to put the castle somewhere hot and gorgeous, so I could at least live there in my head while I was writing, and readers could live there too later on. The ice-house scene would have to go.
I set my husband the task of finding me an island in the Mediterranean, off the coast of Italy, that wasn’t too big and wasn’t already too famous. (Monte Cristo, though otherwise perfect, was out.) Within a day or two, he’d found me a little cluster of islands called Le Sirenuse, off the Amalfi coast in southern Italy. One of them had an absolutely stupendous villa on it – now a VERY posh, VERY gorgeous, VERY expensive place for hire – that was built by Le Corbusier used to be the home of Rudolf Nureyev. As a huge ballet fan, I loved the connection. I spent many happy hours on my laptop, exploring links like this: 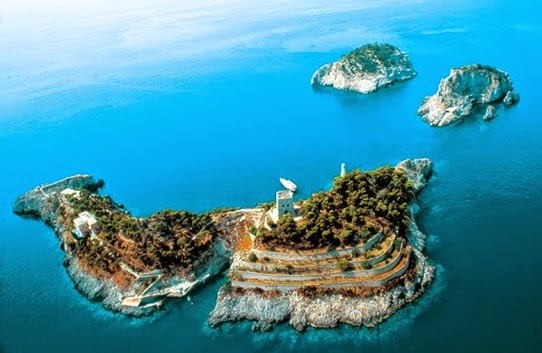 (Gallo Lungo, Amalfi coast)
This was my island. The location for my castle. I was home. The palace I built there for the book has some elements of Nureyev’s villa in the upper stories, but it’s much bigger, grander and scarier. It’s based more on the ruins of Tiberius’s castle on the nearby island of Capri. Given the evil billionaire that I installed there, it seems only fitting that he should take after a mad Roman emperor. 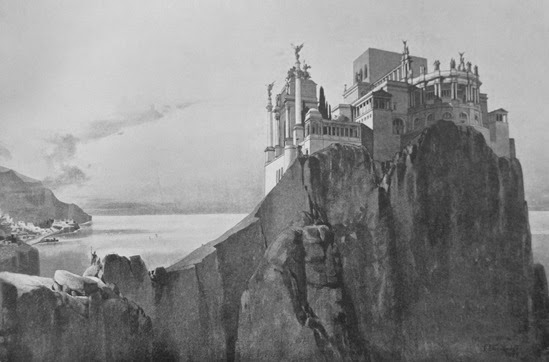 (Villa Jovis, Capri)
Even the islands’ name was right: Le Sirenuse. This part of the Italian coast was thought to be the home of the Sirens, who were beautiful, but fundamentally trouble, so fitted my story perfectly. I renamed this particular island the Isola Sirena, which means mermaid in Italian, and the castle became Castello Rodolfo, after Nureyev. Sometimes, I picture him there, creating a ballet about the sirens. Sometimes I picture the emperor Tiberius popping in to visit, and chucking a few slaves off the cliff, for fun. The castle is heaven and hell in one setting, and that’s how I hope readers will react to it in the book.

I never completely gave up on my original south coast of England idea. For ages, I wasn’t sure where Peta, the heroine should live, because she was an army child, like me, who was always moving from place to place. Then I found out about St Thomas’s Church in Winchelsea, which fitted my story for many reasons. Peta’s home became an ancient inn once used by smugglers down the road in Rye. When I visited the town for research (it’s lovely – go there!), I discovered that Rye has a castle of its own, on the top of the hill overlooking the Channel to the coast of France. 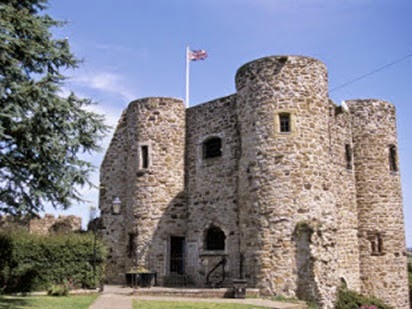 (Rye, East Sussex)
I started out seeking out castles, and they ended up following me. To me, the Castello Rodolfo is as real as if some ancient, crazed aristocrat really had built it, to repel the pirates who ruled the Mediterranean centuries ago. I can picture its painted ceilings, lavender-scented pool, its dark, damp, dungeons, and its slave tunnels, so narrow and low that only children can use them. And Peta Jones, my heroine, feeling her way around them in the dark.

Now I’m working on new story based in a half-abandoned country house, where the silk bed hangings are shredded by light and time, and centuries of lovers have carved their names in its ancient glass. No it doesn’t really exist, but next year, hopefully, it will exist in a book. And once again, a girl will be busy discovering its secrets. And once again, I’ll be kind of wishing I could be there with her, exploring the dark passageways and working the mystery out.
- September 07, 2014