Thrilled to welcome one of my favourite authors, Keris Stainton, to the blog today as part of the Starring Kitty blog tour! Starring Kitty was utterly amazing - I published my rather incoherent e-mail to Keris and Catnip's Liz Bankes last month, and followed up with a (slightly) more coherent review yesterday, so you should definitely read ASAP - as soon as you've finished this blog post, in fact! 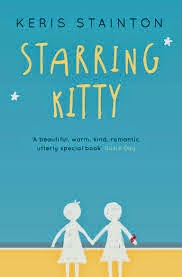 In Starring Kitty, the three friends - Kitty, Sunny and Hannah - enter a film-making competition (despite not knowing anything about film-making). I don't know much about film-making either, so I thought I'd share my five favourite films instead.

I've lost count of how many times I've seen this film, but I never get tired of it. I love every single thing about it. And New York looks beautiful. I find it harder to watch since the writer - and one of my heroes - Nora Ephron died, but I still watch it at least once a year.

I don't usually like scary movies, but I adore The Sixth Sense. It's brilliantly acted and properly scary, but also genuinely moving. There are four bits that make me cry every single time and I still find the opening (with Donnie Wahlberg!) so shocking and sad. ("Do you know why you're afraid when you're alone? I do. I do.")

Singin' in the Rain

My nan was mad about musicals and introduced me to loads of them. Singin' in the Rain is my favourite. It's got Make 'Em Laugh and Moses Supposes and, of course, the most glorious routine in the history of musicals (that'd be the Singin' in the Rain bit). It's given me a lifelong love of Gene Kelly and taught me to never jump out of a cake wearing a swimming costume.

This documentary about the French high-wire artist Philippe Petit's wire walk between the Twin Towers of New York's World Trade Centre is utterly breathtaking - funny, sad, thrilling, charming. Even my scared-of-heights husband loved it (although he did have to cover his eyes quite a lot).

I could claim I watch so many children's films because I've got two small-ish children, but the fact is I've always watched children's films, particularly Disney. I still love the classic Disney films (apart from the too sad ones like Dumbo and Bambi), but Pixar has taken over as our family's favourite. It's hard to pick just one, but I think I'd have to go with Finding Nemo. It looks beautiful, is funny, sad, and inspiring, and I never tire of watching it (and I've seen it hundreds of times). Oh and it's got Ellen Degeneres. Just keep swimming!

Find out more about Keris on her website, blog, and the fabulous UKYA site she runs with fellow fabulous authors Keren David and Susie Day! You should definitely be following her on Twitter, of course. Also, check out the other tour stops, as listed in the banner on the right.