Series Starter Recommendations: Shadow of the Wolf by Tim Hall, Hero 41: Eye of the Gargoyle by Sam Penant, Secrets of the Tombs: The Phoenix Code by Helen Moss

Still trying to catch up with some reviews! Three below that kick off new series; in each case publishers have been kind enough to send to me for review consideration. 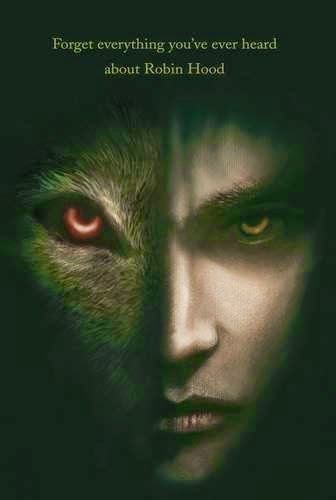 This is the darkest, strangest, and possibly coolest version of Robin Hood I've ever seen. I'm not even going to go into more details than that when it comes to a plot summary, because really, who needs anything more?

Most of your favourite (and not-so-favourite) characters are here; Robin, Marian, the Sheriff, Will Scarlett, Much - but in most cases decidedly NOT as you've seen them before. Robin, whose parents disappear when he's just a child, and who brings himself up from the age of seven, is a well-portrayed central character who's gripping to read about although often seriously flawed. Marian, his bosom companion in childhood who also gets snatched away from him, is perhaps an even more intriguing character, while Will Scarlett might be the most interesting of all. There's good and bad - or at the very least the potential for good and bad - in nearly all of the characters here, the exceptions being the Sheriff and his chief torturer, as evil a pair of villains as I've seen in a long time.

In addition to the strong characters, there's a really compelling plot - so much so that I'm keen to read the second one despite it being a much, much darker read than my normal preferences are. I don't want to go into too many details about what happens, but it's a gripping read which is completely unlike any treatment of the Robin Hood legend I've ever read. The fantasy elements meld well with the descriptions of England at the time period, and Sherwood Forest is a stunning setting. As well, it's nice to see a trilogy opener which gives us a satisfying conclusion - while it definitely leaves us in an interesting position for book two, I thought this did a great job of bringing this instalment to a good climax.

Also, it's very well-written, with Hall's prose something you'll want to savour. I think Darren from the superb Book Zone for Boys blog summed it up beautifully, saying "It's not a book that is a light read for the beach as it craves for your full attention; it is atmospheric and rich in detail and if you give it the time and attention it deserves it will draw you in completely." I definitely agree there!

One last thing - isn't that cover STUNNING? A really beautifully-designed one to go with a beautifully-written book. 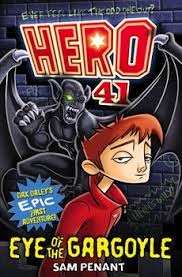 40 students have been brought together in an old prison converted into a school. A special school - a school for superheroes! Each of the 40 has a power, and here, they will learn to use it. Except there aren't 40 students - there are 41. Dax Daley, the extra, doesn't have a power at all - yet, at least. This is a shame, because with a bad-tempered gargoyle demanding that Dax and his friends find his missing eye, he needs all the help he can get.

I've not seen that much about this, which really surprises me, because given the number of people actively trying to read more MG at the moment and the popularity of superheroes in all types of media, I'd have thought it would be getting more buzz. I'm unsure why it's not - it's a fun story which does a decent job of setting up the series but also provides a satisfying read in its own right, despite an ending which seems a bit on the abrupt side. The three main characters - narrator Dax and friends Speechless and Cat - form an interesting trio and I like the interactions between them, while the gargoyle is a strong nemesis for them. There are some brilliant scenes, in particularly ones in which the superhero students one by one discover their powers!

I found the ending to be rather dark - as mentioned above, this is personal preference only, but it did take me by surprise a bit. Despite that, I'll definitely be on board for the next in the series, which I believe is coming in February, and look forward to seeing where our heroes go from here. 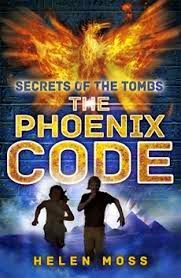 Ryan and Cleo's parents are on a dig seeking the mysterious Benben Stone, a hugely powerful artefact. As they search for it, though, the two children become aware that a mysterious cult is also seeking it - but when they find clues, they're unable to make anyone believe them. Despite initial misgivings about each other, they quickly realise they'll have to work together if they want to solve the puzzle of the Benben Stone before the villains can obtain it.

Helen Moss is an author I'd never read six months ago; in that time period I've read fifteen of her books. In a fortnight in which I concentrated on MG earlier this year, I marathoned the Adventure Island boxed set, intending to read one a day (but actually finishing two days early because I couldn't bring myself to wait any longer to come to the conclusion of such a wonderful series!) As you can imagine, my expectations for this one were rather high; I'm glad to say it didn't disappoint! As I'd come to expect from the earlier series there's a great plot with a challenging mystery for the heroes to solve and a huge amount of action packed into the book. Unsurprisingly, I made lots of guesses about, well, pretty much everything, and got NEARLY all of them wrong - even though I'm sure I should have been able to pick up on clues! However there are noticeable differences from the Adventure Island series in that it's clearly aimed at slightly older readers - it's still MG, I'd say, but with more potential to draw in YA readers as well. It's a much meatier read than the other series was, and there's more of a hint of romance here, which is very nicely done.

If I'm honest, as much as I enjoyed this, it's not quite taken the place of the superb Adventure Island series in my heart just yet, but that DID have fourteen books to get me to fall in love with Jack, Scott, Emily, Aunt Kate, and - best of all - Drift! I think that this is better than the first book in that series was and I have no doubt that I'll soon feel just as strongly about Ryan and Cleo as I do those characters. Definitely a series I'm really looking forward to continuing with.

I also reviewed Runaway by Marie-Louise Jensen, published by OUP, a really enjoyable historical action/romance. Head over to The Bookbag for fuller thoughts!

Oh, and I read The Sin Eater's Daughter by Melinda Salisbury, coming in February from Scholastic. I'm going to review nearer the time as it's not out for ages (and I'm kicking myself for reading it so soon as I'll have to wait forever for the sequel) but if you like brilliant, breathtaking, beautifully written fantasy novels, pre-order it!
- July 28, 2014