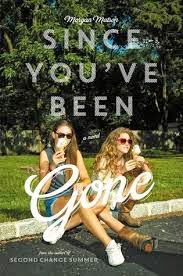 As most readers of the blog/my Twitter feed will know, not only is YA contemporary my favourite genre, but Morgan Matson is one of my very favourite authors in the genre. I've loved all three of her books - Amy & Roger's Epic Detour, Second Chance Summer and the new one, Since You've Been Gone - so I was completely thrilled when I got the chance to interview her!

I’ve actually been lucky enough to meet a lot of my readers – on tour, at conferences, and book events.  They’re the most awesome people ever, and I’m unbelievably lucky to have such amazing readers.  But when I’m writing, especially my first drafts, I can’t think about the fact that this will someday be in a bookshop, which anyone may read.  I think if I did, I’d never get past the first page.  I think I have to trick myself into pretending I don’t have any readers, and nobody will ever see it.

2. I love the list of tasks that Sloane leaves for Emily – especially the ones that take her out of her comfort zone! When you were a teen, if someone had written you a similar list, what would have been on it?

I think they mostly would have been about telling people how I felt about them.  Skinny-dipping as a teenager didn’t scare me as much as breaking up with someone in person J

3. Another question about you as a teen – I adore the playlists in this book and Amy & Roger. What six songs would have been top of your ultimate playlist when you were growing up?

I went through a bunch of different music phases in high school. I was a big musical theater fan, so definitely something from that genre – probably “Stars and the Moon” from Songs for a New World and “Moments in the Woods” from Into the Woods.  Then I went through a big girls-with-guitars phase, so let’s add “Untouchable Face” by Ani Difranco.  And then I got very into Barenaked Ladies and Dave Matthews Band (I’m dating myself here) so let’s say “If I Had a Million Dollars” and “Ants Marching”.  I also got very into oldies when I was in high school, so let’s finish out with the Beach Boys’ “Wouldn’t it be Nice?”

I hope you're not dating yourself TOO much; I was a big Barenaked Ladies fan for a while! And I love Songs From A New World; Jason Robert Brown is amazing!

I think it would have to be the trio of Harry, Hermione, and Ron from the Harry Potter books.  And I loved when the group would expand and Neville and Luna and Ginny would be hanging out too.

Fab choices! I love Harry Potter, although I think I actually prefer Ginny/Luna/Neville to the 'main' trio.

5. After so many big film adaptations of speculative MG/YA fiction in recent years, there’s been a rush on contemporary adaptations recently. Perks of Being A Wallflower, The Spectacular Now, and The Fault In Our Stars have all received great reviews while the upcoming If I Stay looks amazing.  Is there any chance of a screen version of Since You’ve Been Gone or of your earlier books?

No chance yet – none of my books have ever been optioned for film. Maybe someday!

6. Your books frequently feature whenever people are talking about perfect summer reads! If you were going down to the beach for a day, which other author’s books would you want to take down with you to read?

7. I know you’ve talked on your website about previous road trips, including the one you did to research Amy and Roger. If you had the chance to go on another, where would you go from and to, what one place would you absolutely have to detour to, and which other YA authors would you take along for the ride?

Such a hard question! I’m actually dying to do a road trip across Australia.  I can say this because I’ve done absolutely no research about what this might involve.  But I met a couple a few years ago who told me about how they did that for their honeymoon, and it sounded like the coolest thing ever.

I would absolutely have to detour to Perth – I’ve heard such amazing things about it!

And if I could take any YA author with me, I’d pick Rachel Cohn. She’s lovely, practical, knows Australia, and would be wonderful company!

8. In addition to the three books you’ve released under your own name, you’ve written four as Katie Finn. Why do you use the two names?

Well spotted! You found my (not-so) secret identity! I started writing the Katie Finn books when I was working at the publishing house Scholastic.  I was working as an editor, and we started talking about a book about social networking.  I got the opportunity to write it, and so I wrote Top 8, which I always describe as a “Facebook mystery”.  But at that point I was already working on Amy & Roger, and knew these would be very different books with different feelings to them.  And I wanted to do something to separate the two.  And Katie Finn is my middle name, so it doesn’t feel like it’s totally made up!

9. I love all three of your covers – so utterly gorgeous, and perfect for the books! Do you get any say in them, or do you just wait and get pleasantly surprised?

Thank you – I’ve been thrilled with every one of them! I do get some say.  For the American version of Amy & Roger, the finished cover was shown to me and I loved it.  For Second Chance Summer (US) I spoke to the cover designer about the setting and what was in my mind – a girl on a dock, by a lake with mountains.  And what she did with that blew me away!

I love love LOVE the UK covers of my first two books. The attention to detail, the small touches – they feel like my books, come to life.  I even commissioned the cover artist to make me an original of the A&R cover, which I have framed in my office – it always looked like a piece of art to me.

But I think it’s great that the Since You’ve Been Gone cover is the same in the US and the UK.  I did have more input for this cover.  We did a photo shoot and I got to weigh in on the models and locations.  And both girls are wearing my clothes, jewellery and sunglasses! I sent along a box of things to the designer, expecting they would just be used for inspiration, and when she sent me the pictures from the shoot, I realized they were wearing my things, which made it all the more special.

That's really cool! I love that it's the same cover for both countries, as well.

10. What’s next for Morgan Matson?

I’m going to start writing my new book in August. It’ll be out in the States in summer 2016. I don’t want to say too much, since I haven’t written a word yet. But I’m really excited about the story, and looking forward to starting to write it later in the summer.