Recommendations: Flora in Love by Natasha Farrant, High & Dry by Sarah Skilton, Don't Even Think About It by Sarah Mlynowski 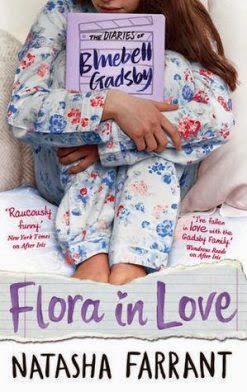 Title: Flora In Love
Author: Natasha Farrant
Genre: MG/YA contemporary (it’s the 10-14 age range which falls slightly in between, as does so much of the brilliant UK contemporary!)

Why I read it: I liked the first book and was always going to read it but after hearing Natasha read an extract at the Faber bloggers’ event a few months ago I was DESPERATE to read, and devoured on the way home. (Of course, four months later, I’m now writing the review!)
Obtained: From Faber at the bloggers’ event – thank you!
Very Highly Recommended

Spoiler warning for After Iris, first in this series.

After a shocking announcement from Bluebell’s family, Bluebell thinks everything could be turned upside down. She’s desperate for au pair Zoran to come back to them but Zoran has problems of his own – including new guitar protégé Zach. Then Zach meets Blue’s sister Flora and the two immediately hit it off, but Blue’s enthusiasm over filming everything leads to her putting her foot in it. Will Flora ever talk to her again, and when Zach goes missing, can the sisters and the rest of their family help find him?

I was a fan of the first in the series, After Iris, but didn’t absolutely love it – perhaps a case of my expectations being a little bit too sky-high after the overwhelming brilliance of Natasha Farrant’s first novel for teens, The Things We Did For Love? I’m pleased to say that I adored this one – it’s an improvement on the first in every way. There are lots of hilarious scenes – I loved Bluebell and Dodi trying to apologise to Flora, as well as a stunning poetry competition – but there’s also a huge amount of warmth, love and a great plot here. I also really like the way it’s told, with the video transcripts being perfect additions to the narrative!

In addition, I thought the characterisation was superb. In book one, I said that Bluebell and her siblings were fabulous, as was scene-stealing au pair Zoran, but was less convinced by her parents and Dodi. Here, all of the characters, new and old, feel wonderfully realistic and brilliantly written, and the relationships between Blue’s chaotic but loving family are outstanding.

Hugely recommended as one of the sweetest and funniest contemporaries of a great year for the genre! I can’t wait to read book three. 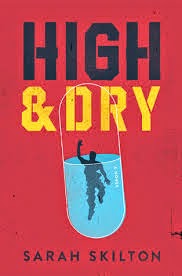 Title: High & Dry
Author: Sarah Skilton
Genre: YA contemporary
Why I read it: Skilton’s first, Bruised, was one of my favourites of last year, so this has been on my ‘must read it’ list.
Obtained: Generously given to me by a non-blogging friend
Highly Recommended

Charlie Dixon is having a bad week. Still struggling to get over being dumped by his girlfriend, he’s turned to alcohol, and now finds himself the lead suspect in the near-fatal drug overdose of a schoolmate. Offered an alibi by an ex-girlfriend who needs him to find her a missing flash drive, he takes the chance to investigate – but quickly finds that the truth is hard to come by and a lot of people seem to have been doing some dark dealings. Can he solve the case and win the girl back?

While Skilton’s first novel, the excellent Bruised, was memorable for its stark realism, this is altogether a different type of book. It’s technically contemporary, I suppose, but it seems deliberately unrealistic, set in a school where the cliques are taken so far to the next level that permission is needed to speak with younger students in a different group. With the school divided into songbirds, beckhams, and chekovs, Charlie is forced to use all his ingenuity to try and get to the bottom of the mystery. This reads like a mash-up between a normal contemporary and a film-noir.

While the setting is far from what I expected, where the book IS completely realistic is in its portrayal of the characters and the dialogue. I loved the friendship between Charlie and Ryder, the relationship between Charlie and Ellie, and – perhaps most of all – Charlie’s family life. I found it really interesting that he actually talks to his parents and goes to them for help at times, because it’s still relatively rare to see that in a YA novel. As a narrator, Charlie is superb, with a breathtaking voice. There are lines here which are so hard-boiled you could probably break something on them – “She looked like a sad girl in search of a tragedy. I could steer her toward mine, but it would cost her a finder’s fee.”

In addition, we have a layered, complex, and really hard-hitting climax – definitely one of the most memorable endings of the year so far for me.

Highly recommended and the huge differences between this and Bruised make me even more excited for Sarah Skilton’s next novel – I now have no idea what to expect, but I’m sure it will be fantastic! 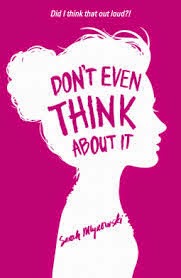 Title: Don’t Even Think About It
Author: Sarah Mlynowski
Genre: YA contemporary (ish?)
Why I read it: Read for #aryaclub, although I’m a big fan of Sarah Mlynowski’s so would no doubt have picked it up anyway sooner or later.
Obtained: Via Netgalley (thanks to Orchard!) in exchange for consideration for a recommendation.
Recommended

Something weird happens after 10B get their flu shots - they develop telepathy. There are good points - they know what other people think of them, they can cheat on tests, and they have the upper hand in conversations with others. But there are some drawbacks as well - not only do they no longer have any secrets from each other, but also, knowing what other people think of them can be a two-edged sword! High school is hard enough to survive when you're normal - will being an Espie make it even more difficult?

This was exactly what I’ve come to expect from Sarah Mlynowski after reading and enjoying Ten Things We Shouldn’t Have Done and Gimme A Call – a light, fun, easy read. Someone at my book club last week described it as ‘like a popcorn movie’ and that sums it up pretty well for me. I quite liked that there was no real explanation given for the telepathy and that Sarah Mlynowski instead focused on the uses – and problems – it brought. Having said that, I also thought there was a bit more depth to the novel in general than I'd perhaps have expected from the summary – in particular, it raises the question as to whether it’s better to think you’re being talked about, or to know for sure that you’re not! It's also got a really interesting narration as the entire group tell their story, sometimes disagreeing with each other.

My slight issue with this one which stopped me pushing it over recommended was that I didn’t feel we got to know many of the characters that well, partly because there were so many of them. Pi, Olivia, Tess, Teddy, Cooper, BJ, Madison, and others all feature heavily but they’re mostly slightly one-note – Pi is an overachiever, Tess is hung up on Teddy, Madison feels really guilty at cheating on Cooper, and so on. The best of them are Olivia, who gets a fair amount of character development, and Cooper, who we get to see struggling with family issues as well as a cheating girlfriend.

Despite this, it’s an enjoyable read and I’d definitely recommend it.