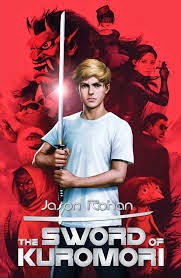 Title: The Sword of Kuromori
Author: Jason Rohan
Obtained: From non-blogging friend.
Why I read it: I met Jason at the #drinkYA event a month or so back and I was keen to read this one as soon as he told us about it.
Genre: MG fantasy
Highly recommended

Greek legends seems to have been done to death in YA and MG recently, there’s been a fair amount influenced by Norse mythology over the years, and Rick Riordan’s Kane Chronicles are probably the most popular of several books and series which have brought us stories based on that of Egypt. Japanese culture doesn’t seem to have played as big a part (although fellow reviewers at The Bookbag are big fans of Stormdancer and Kinslayer) so it’s refreshing to see an adventure here featuring kappas, nure-onnas, and oni, amongst other fearsom creatures.

While the Japanese setting and monsters from that culture are likely to be relatively new to most readers, the central story is more familiar. As in so many fantasies, a hero with a special power, subject of a prophecy, is sent on a quest to save numerous lives. However it’s not just the Oriental influence which lifts this above the pack – hero Kenny and Kiyomi, the girl who fights alongside him, are two of my favourite characters for a while. (I initially wrote ‘girl who helps him’ but that’s rather understating Kiyomi’s importance. She ‘helps’ him in the same way Hermione helps Harry Potter; she’s significantly ahead of him for a large amount of the novel. And she has a motorbike, shuriken, wooden swords, and a host of other weapons - well-prepared is something of an understatement when trying to describe this heroine!) That said, Kenny develops to hold his own and it’s an intriguing journey for him as he starts to master powers he knew nothing about.

In addition to the strong characters, I like that there’s a little bit of romance (more than usual for a book aimed at this age range) without it ever dominating the plot, while Rohan’s fight scenes are really gripping. We also get a wide range of villains, from the truly evil to the pitiable and everything in between, and a strong ending which gets a huge thumbs up from me for actually managing to resolve this storyline well but still leave me looking forward to the next in this exciting new series.