I'm HUGELY excited to be on the Glaze blog tour tomorrow, so thought I'd build up to it by finally writing my recommendation for it today!

(Speaking of the Glaze blog tour, it's BRILLIANT - look right for details, or head over to organiser Faye's brilliant blog, A Daydreamer's Thoughts, for links to all of the participating sites.) 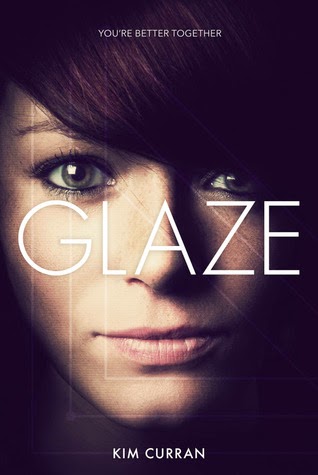 Title: Glaze
Author: Kim Curran
Obtained: From author in return for consideration for recommendation.
Why I read it: Fan of author.
Genre: YA dystopian thriller
Highly recommended

Social network Glaze has brought the entire world together - those over 16, at least. Petri Quinn, daughter of founder Zizi, is desperate to get on it. But then she's falsely accused of being behind a riot that breaks out when she's at a protest, and she's fitted with a blank chip. Feeling her life is over before it's begun, Petri is desperate enough to do anything to get on - even work with an underground hacker group. But when she manages to get on Glaze with help from her new hacker friends, she finds that her chip is giving her far more information than she should have. Overwhelmed by all of this, Petri starts to realise Glaze may be more dangerous than anyone had ever imagined...

I don't normally read dystopian books these days (apart from a few exceptions like Joelle Charbonneau's brilliant 'The Testing' series) but I was intrigued by seeing Kim tweet and post about Glaze, and jumped at the chance to get a review copy. I'm a fan of Shift and was intrigued to see how her first self-published novel would compare - and much as I enjoyed Shift, this is even better.

I think what stood out for me here was how chillingly realistic the world was. The Hunger Games and The Testing, 2 of my other 3 favourite dystopians, both feel like settings that could potentially exists many centuries into the future. Delirium, while it's probably my favourite dystopian series, doesn't really feel like one that could exist at all. But Glaze? Glaze feels like it's a society which could happen very, very soon - and one that, in some ways, already is. It's a totally believable extension of current social networking and of trends on the internet, which might make some people think twice about the amount of time they spend on Facebook and Twitter. (Not me, clearly, as I'm completely hooked on Twitter, but some people!)

However strong the world-building is, though, it's always the characters that matter the most to me, and Petri is a brilliant heroine. She's tough, resourceful, manages to cope even when scared, and capable of making terrible mistakes but able to face up to their consequences. As good as she is, though, it's the villain here who's the most intriguing person, simply because their motivations are so seductively compelling in some ways.

It also has an incredible climax - one of my favourites of the year so far - which is both tremendously exciting and deeply satisfying. (And as far as I can tell, it's an actual stand-alone - rarer than hen's teeth in YA speculative fiction!)

This one is highly recommended, and at under £3 for Kindle is a bargain! If you're not an e-book fan - or if you want something gorgeous for your shelves! - I think there MAY be a few of the limited edition hardbacks left to order, while I believe Kim's also doing a paperback edition in the very near future.

Check back tomorrow for Kim's top ten social media moments and for a chance to enter a tour-wide giveaway with one of the most impressive prize packs I've seen in a LONG time!