I've been lucky enough to meet the awesome Jeff Norton several times this year,the first of them being at the fabulous Faber brunch when he read an extract from his upcoming book, starting the Memoirs of a Neurotic Zombie series. When I was offered the chance to participate in a cover reveal AND post an extract, I jumped at it! Many thanks to Hannah for setting this up.

Also, there are nearly 20 different extracts so I strongly encourage you to check out each and every one! I meant to link to all the other bloggers involved but that would have involved organisation. This is number 3, find the first 2 at Readaraptor and The Overflowing Library, then head to Pewter Wolf for the next! 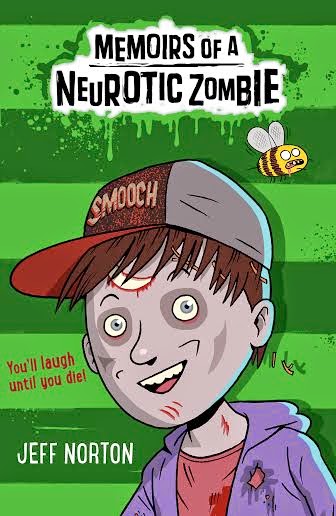 'My name is Adam Meltzer and the last thing I remember was being stung by a bee while swinging at a robot-shaped piñata on my twelfth birthday. I was dead before the candy hit the ground.'

BLURB
Memoirs of a Neurotic Zombie is narrated by the hilarious Adam Meltzer - pre-teen, worrywart, and now zombie. Adam's family gets the fright of their lives when he turns up at their door desperate for a shower . . . three months after his funeral.
When most people think zombies, they think of eating people, and unintelligent monsters.
But Adam doesn’t like germs. Or dirt. Or things being disorganised. So waking up as a zombie was definitely not in his plans, and the idea of eating people is disgusting. Getting stung by a bee doesn’t normally lead to becoming a zombie, and it seems incredibly unfair that it’s happened to Adam.
Soon Adam's back at school trying to fit in and not draw extra attention to himself, but when he sees his neighbour Ernesto transform into a chupacubra, and the beautiful Corina (Adam's number one mega-crush) turns out to be a (vegan) vampire, undead life is never going to be the same again.

A hilarious adventure caper - if Ferris Bueller met Shaun of the Dead - all about friendship and being yourself . . . even if you're undead.


EXTRACT
Adam attempts to define himself

People die and they don’t come back. Death is the series finale of life, and there’s no reunion show. It sucks, but it’s true. And unless it happens to guys like Darth Vader’s boss or Osama Bin Laden, it’s pretty sad.
Death is a one-way street with no U-turns and no exceptions.
But now there is an exception.
Me.
The zombie.
It’s the best description for my condition. And not to be a stickler for detail – but once you’re dead, there isn’t a whole lot left to be a stickler for – I’ve decided to come to terms with the label. Sure, there are other words I could use: reanimated, walking dead, living dead, resurrected. But none of them feel quite me.
Reanimated sounds like I’ve been escaped from the Disney vault.
Walking Dead is that scary TV show, and I’m pretty sure it’s a registered trademark.
Living Dead, well, that’s literally a contradiction in terms.
Resurrected, maybe, but let’s face it, that one’s got a lot of Jesus connotations.
No, it’s zombie all the way for me. I’ve been given a lot of labels in my twelve years of living – neurotic, sensitive, precocious, shower-hogger; and I may still be all of those things, my new defining characteristic is that I’m technically dead.


Doesn't it sound awesome? I can't wait to read the full book! Thanks again to Jeff and Hannah for letting me take part in this reveal.
- May 22, 2014