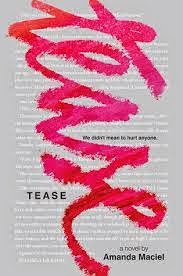 Title: Tease
Author: Amanda Maciel
Obtained: Borrowed from Debbie at Snuggling on the Sofa
Genre: YA contemporary
Very Highly Recommended
Out 1st May (but hey, if you can't wait that long, I saw a few copies in Foyles on Charing Cross Road the other day!)

I was unsure about reading Tease because I’ve said many times in the past that I have strong preferences for likeable main characters, so a story about a girl accused of bullying another until she committed suicide isn’t really my usual idea of a good read.

Thankfully, a couple of people whose opinions I really respect and generally agree with persuaded me to give it a try – especially when Debbie at Snuggling on the Sofa offered to lend me a copy. This is a brilliant character-driven story which is one of the most powerful I’ve read all year. There’s an old saying ‘’Everyone is the hero of their own story’’ and it’s clear that in lead character Sara’s eyes, at least at the start of the book, this applies to her. She considers herself the real victim in all of this – a chilling, but totally believable, lack of empathy which makes her fascinating to read about. As the novel progresses she becomes a much more complex character, through her interactions with summer school classmate Carmichael, her therapist and solicitors, and her family.

It’s also a thought-provoking and important read. Particularly realistic is the lack of knowledge Sara’s parents have of what she’s doing to victim Emma, especially in cyberspace. As for what she is doing? Yes, it’s clearly bullying but perhaps what’s most hard-hitting is just how common some of these types of acts are. I know as a former secondary school teacher that things like the events of the novel are nowhere near as rare as we’d like them to be – although thankfully the consequences aren’t normally this terrible. (The ease in which the girls set up social media profiles for Emma is scary.)