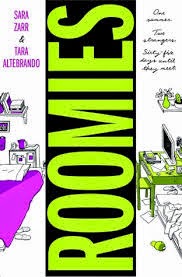 
Roomies tells the story of two girls, EB and Lauren, who are about to move into college together to share a room. It's not a college tale, though - it takes place before they get there, as they get in touch and start to open up to a stranger about their lives, hopes and fears, while always remembering this is someone they're going to be meeting in real life and spending a lot of time with very soon.

It always surprises me how few YA books are about friendship, considering what a massive part of the teen years it is. That's not to say there aren't books that do friendships really well - it's been discussed in various blogs fairly recently and there are several that capture either pairs of friends or groups of mates brilliantly. (For pairs, I LOVE Karou and Zuzana in Laini Taylor's novels, Taylor and Lucy in Second Chance Summer, and Stella and Ruby is Stephanie Guerra's Torn.  For groups, the quartet in Ally Carter's superb Gallagher Girls series, the guys in Tom Easton's Boys Don't Knit, and the boys and girls in Candy Harper's Have A Little Faith are all fabulous.)

But there's definitely a lack of books which are ABOUT friendship, compared to all the romances out there, which seems really weird, because there's surely a huge amount of potential there. Thankfully, Roomies goes a long way towards redressing the balance because it's a stunning portrayal of friendship in all its forms. There's the developing friendship via e-mail between the two title characters, the changing friendships they each have with the people they're leaving behind when they go to university, and even the way that their relationships with their parents change as they take their first steps away from home.

All of these are captured brilliantly. It's the central one which is the focus of the book, as the title suggests, and Sara Zarr and Tara Altebrando really seem to get how difficult it is to form a friendship online, having to judge what a person's saying from their words alone without the benefit of tone or body language. EB and Lauren open up to each other more and more as the book goes on, but is it possible to be really good friends with someone you haven't even met? This raises a very interesting question - I consider myself to be quite close to various people I've met online, going back nearly 10 years in one case, but I think I probably feel closer to those I've met in person than those I've solely talked to over the internet. (Which doesn't mean I don't really appreciate those of you I haven't been lucky enough to meet yet, of course!)

It's also a staggeringly cute book. And I feel that's going to sound incredibly dismissive, but it's not meant to be. I think 'cute' is massively underrated and I wish there were more people writing it this well. As well as the friendships, the two romances that develop between EB and Lauren and their new love interests are gorgeously written and it's one of those books which leaves you just really hoping that everyone gets a happy ever after.

Oh, it has some fabulous supporting characters, as well. I loved Lauren's big, somewhat unruly, family - particularly her parents, who are amazing! - and Zoe holds a special place in my heart as she's cool, popular, and surgically attached to her iPod. Kind of like me, if I was cool and popular.

All in all, this is a must-read, probably the only must-read to come out of the US so far this year apart from Tess Sharpe's Far From You.
- April 18, 2014