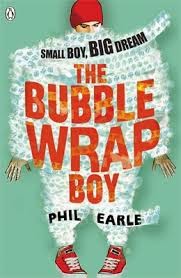 Title: The Bubble Wrap Boy
Author: Phil Earle
Obtained: Via NetGalley in exchange for consideration for a review
Genre: YA contemporary
Highly Recommended
Out 1st May

Tiny Charlie Han is an outsider at school, whose only friend is Sinus, a fellow outcast. At home, he suffers from an overbearing mother and a quiet father who won't stand up to her. But Charlie believes that ''everyone's good at something'', and when he finds a special talent for skateboarding, it might be the start of something special - if his mum's constant need to keep him safe doesn't get in his way.

I'm not absolutely sure if I'd describe this as Phil Earle's best book yet, partly because he's consistently excellent and partly because it's so different from his others that I've read - Saving Daisy and Heroic - that it's hard to compare them. What's definite though, is that it's my personal favourite of the three. I admired the tough issues that both of those two dealt with and found both of them gripping, but this is written with a lighter touch and it's the kind of book which I really love to read.

Charlie is a fabulous main character - warm, clumsy, well-meaning, and optimistic despite his problems - and there's a great supporting cast as well. I thought one of the most interesting things was seeing his friendship with Sinus change from what seemed a really shallow 'friendship of convenience' with neither of them having anyone else to hang around with to something much deeper. I also thought Charlie's mum was especially well-portrayed - at first I couldn't believe how overprotective she was of him, but as we find out more about her past it makes total sense.

The skateboarding scenes, as Charlie first struggles to get to grips with the board and then discovers a surprising talent, are brilliantly written and exciting as well as funny. And even though it's lighter than Phil Earle's previous books it's still an emotional read in places, as Charlie meets one particular character who has a huge effect on him. It's definitely a book that will move you as well as make you laugh.

All fans of teen contemporary novels should definitely check this one out!
- April 25, 2014