Recommendations: A Kiss In The Dark, Ironheart, Trouble and Jane, The Fox And Me 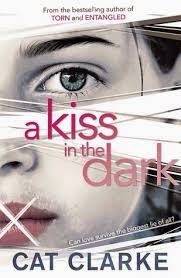 Title: A KISS IN THE DARK
Author: Cat Clarke
Obtained: From publisher to allow me to prepare questions for an upcoming interview with Cat.
Why I Read It: Cat is a brilliant author and I've enjoyed all of her first three, particularly the wonderful Torn.
Genre: YA contemporary
Highly Recommended

Alex and Kate meet online and there's an instant attraction between them. When they get together in person at a gig, they're just as right for each other as they are online. It seems like this could be a wonderful romance, but there's a secret at the heart of it which could destroy more than just their relationship.

I've said in the past that I'm not all that interested in reading about characters I don't like; Cat Clarke is the only real exception to that rule who springs to mind. Her main characters often aren't particularly likeable, but they're just likeable enough, because they're always sympathetic. They often make some fairly terrible decisions - both Alex and Kate do here - but you can see just why they make these decisions and it's hard to blame them too much even if you hate what they've done. Similarly, her minor characters are uniformly strong, with Alex's brother Jamie probably being the pick of the bunch. I love the way he's so supportive despite not being around for that much of the book. The parents are definitely less supportive but they're also very realistically portrayed.

As well, it's a hugely tense read - it's clear from early on in Alex's narration that something bad has happened; the question is 'how bad'? Given Cat Clarke's track record of trampling readers' hearts to pieces (thanks for Undone, Cat!) I was glued to the book wondering what would happen at the end.

Highly recommended, this edges out Torn as my favourite of Cat Clarke. It's amazing to think that her first book was only published about 3 years ago; she's becoming one of the truly 'must read' UKYA contemporary authors, alongside others who started at a similar time like Keren David, Keris Stainton and Simon Packham. All have proved to be remarkably consistent! 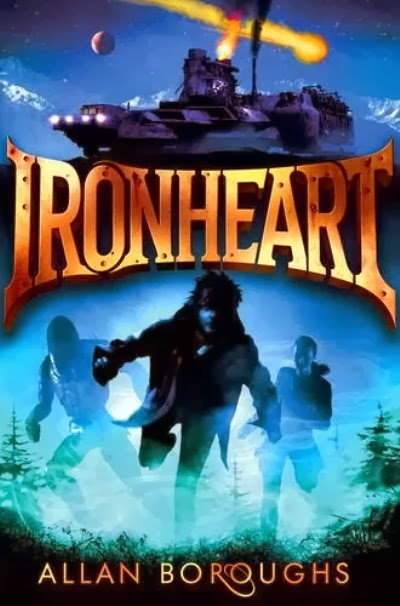 Title: IRONHEART
Author: Allan Boroughs
Obtained: Bought for Kindle
Why I Read It: I got talking to Darren from Book Zone for Boys at the recent OUP event. This was one he'd just read and he was really impressed by it;
Genre: YA/MG adventure (The age range is disputable - if you're interested in reading Allan's thoughts about categorising books, he took part in a Twitter chat I hosted on Wednesday which I'm hoping to Storify later this weekend.)
Recommended

India Bentley's father went missing looking for oil in Siberia. Except it wasn't just oil he was searching for - rather, he was trying to find the lost fortress of Ironheart, whose old world secrets could save humanity - or destroy the world. When she meets tech-hunter Verity Brown and her android bodyguard Calculus, India manages to become involved in a daring adventure. Can she save her father, and the world?

I think this is a well-written debut with some real strengths. It's clear that Boroughs is a brilliant plotter, he's created an exciting story here which is very well paced and kept me guessing all the way through. The world-building is also superb and it's interesting to see the way that Boroughs creates a nightmarish but convincing vision of a post-apocalyptic world.

The characters aren't quite up there with the best of this kind of book for me, at least until the end. The exception is India, the heroine, who is smart, resourceful, brave and loyal - a wonderful creation. I really liked her relationship with android Calculus. The other characters don't seem to be quite as well-rounded for much of the book, although villain Sid and tech-hunter Verity both get some really interesting character development towards the end.

While this seems to be being pushed more towards the tweens and younger teens age range there's enough action and excitement here to appeal to a wide variety of ages. In particular, adults who remember classic Boys Own adventure stories are likely to find it an enjoyable read, as well.

A strong debut from Boroughs, and I'll certainly be on board for 2015's sequel, The Sun Machine!

Note to bloggers/reviewers - if you're interested in reviewing this book Allan Boroughs is offering to provide you with a copy in exchange for a fair and honest review. Details here. 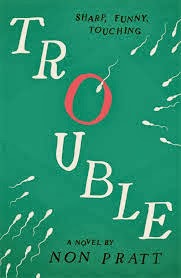 Title: TROUBLE
Author: Non Pratt
Obtained: Received for review from publishers via The Bookbag
Why I Read It: Non, formerly of Catnip Books, is hugely knowledgeable about YA and I was excited to see if that knowledge would translate to a brilliant book. (It does!)
Genre: YA contemporary
Very Highly Recommended

Perfect pacing, a very strong plot, and brilliant characters - this exceeded my (very high!) expectations. Full review at The Bookbag. 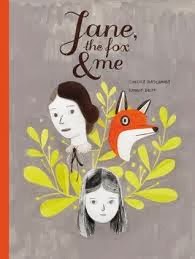 Title: JANE, THE FOX AND ME
Author: Fanny Britt, illustrated by Isabelle Arsenault
Obtained: Received for review from publishers via The Bookbag
Why I Read It: I don't read as many graphic novels as I'd like, so jumped at the chance to review this one.
Genre: MG contemporary graphic novel.
Highly Recommended