Before I forget, the BRILLIANT Anna at A Case For Books ran a Carnegie predictions post last week that I was invited to take part in! I've tweeted about it but haven't mentioned it here yet - if you missed it, check it out here.

One of my aims for the year has been to read more MG fiction, and it's a decision that's paying off pretty spectacularly well. There have been a couple of awesome reads in the last week or so and I may update this post later but for now, I wanted to share the brilliance of Sesame Seade!

Title: SESAME SEADE: SLEUTH ON SKATES
Author: Clementine Beauvais
Obtained: From publisher in exchange for consideration for a recommendation. (Thanks Cait!)
Why I Read It: Cait at The Cait Files and Daphne at Winged Reviews made it sound fantastic.
Genre: MG contemporary mystery
Highly Recommended 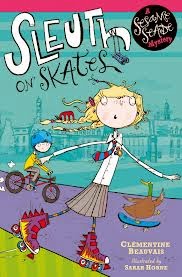 Eleven-year-old Sesame Seade has been waiting all her life to be a super sleuth, so when a student journalist disappears and no-one seems all that bothered, she decides to solve the case herself. Can she track down the vanished girl before her parents work out what's going on?

I think one of the things MG does perhaps even better than YA is fun books. That's not to say there aren't any really joyous YA novels out there, of course - I'm thinking of ones like Boys Don't Knit, Have A Little Faith and Weirdos vs Quimboids. But they seem to be relatively rare and hugely underrated, whereas MG is maybe a more frequent source. I'm pleased to say that Sesame Seade is absolutely huge FUN with a capital F, U and N! Sesame herself is a brilliantly resourceful heroine who's clever, brave and honest, with a wonderful voice. (Having said that, while I loved reading about her, I'm so, so glad that I didn't have to teach her - I even felt sorry for poor Mr Halitosis!)

Much of the credit for Sesame's fabulousness goes to author Clementine Beauvais, of course, for giving us a great set of characters - I really enjoyed the relationship with her mother, a college professor, and her father, a reverend, both of whom clearly love their daughter but find her rather challenging! - and a clever, original plot. I was intrigued by the solution to the mystery and it was a genuinely surprising one. Oh, there are also some fabulous one-liners - I think my favourite is "Normally I would have followed Jesus's advice, since my dad works for his dad..." As if that wasn't enough, it's also got enough throwaway comments referring to classics - as befits a book set at Cambridge university - to pique younger reader's curiosity about Narcissus, Scheherazade and many others, so you can even think of it as educational.

However as great as Beauvais's writing is, the book also benefits hugely from the gorgeous illustrations by Sarah Horne. There are lots in each chapter and they're brilliant - perhaps my favourite being Sesame's friend Toby accidentally karate kicking a rather annoyed professor! Similarly, it's a gorgeously put together book, Hodder have done an amazing job of making it stand out and it's one to buy rather than borrow. (That's partly because you're bound to want to reread, and partly because it'll look stunning on your bookshelves!)

I'm just about to start the second book after the hugely kind Daphne at Winged Reviews passed it onto me and the third, out in April, is near the top of my TBR pile. Highly recommended to anyone looking for a new series to start.
- March 16, 2014