Random Ramblings: Finding Great Books By Accident Plus WIN a signed copy of Romily Bernard's Find Me (UK Only) 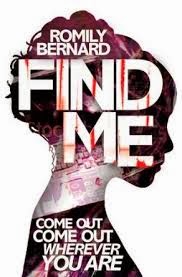 One of the coolest things about being a book blogger is the awesome community - especially all the fab UK bloggers around. I was about to write a list of brilliant bloggers I met last week at Faber and OUP events (okay, ANOTHER really cool thing is meeting authors - Jeff Norton! Nikki Sheehan! Joss Stirling! NATASHA FARRANT!!!) but I have a horrible feeling I'll leave someone out and feel hugely guilty about it, so I won't.

Anyway, as I was saying, the book blogging community is amazing. And updating my spreadsheet of YA contemporary releases means I'm paying even more attention than normal to all of the fabulous reviews out there from British book bloggers. The only tiny, tiny downside, is that I end up reading so much about some books that a) I have an idea what to expect from most things I read and b) sometimes really hyped books that everyone else likes feel like a letdown if I'm not so keen.

So it can be really cool when I stumble upon something I've never heard of before in a bookshop and end up thinking it's great. This has happened to me not once but twice in the last fortnight (side note: are you all suitably impressed that I've read two books that soon after buying them, rather than doing my usual thing of putting them in my TBR pile and never getting around to them?) 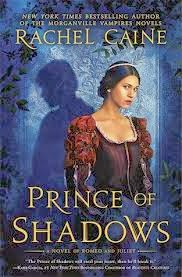 A few days ago I bought Rachel Caine's Prince of Shadows, a Romeo and Juiet retelling from the point of view of master thief Benvolio. It's an intriguing read with a brilliant narrator, some great supporting characters - Mercutio and Rosaline being the best - and it's really cleverly tied into the original play.

As good as that was, though, it wasn't a massive surprise as I've always enjoyed Caine's writing before (although I'm miles behind on Morganville!) I don't think anything beats the feeling of randomly discovering a brilliant book by an author I hadn't even heard of previously, but that happened to me as well! The weekend before last, I visited the utterly gorgeous Tales on Moon Lane - more about this fabulous shop on Saturday - and picked up a recent release that had passed me by previously, Romily Bernard's Find Me.

I read the first chapter in the shop, was so engrossed that I just about remembered to pay for it before leaving, and managed to somehow find my way to a bus stop without actually taking my eyes off the page. (Public safety announcement: THIS IS STUPID. Yes, I know you're all too sensible to do that - and in fairness the bus stop was really, really close - but just thought I'd mention it.)

I then got the bus to the Southbank centre, grabbed a drink, and sat in one of my favourite places in London reading an excellent book. God, I love living down here. This was so good that I nearly managed to stay off Twitter for the two hours or so it took me to read it! (Yes, I was obviously never going to COMPLETELY stay off Twitter, but the only tweets I actually sent were variants of "OMG you guys, am reading Find Me by Romily Bernard - it's awesome!") I won't go into too many details of this clever, tense thriller - I have to save some for my recommendations post later this week (it's Highly Recommended, by the way!)but I'm fairly sure that most of my readers will really enjoy the book in general, and narrator Wick - a tough but troubled computer hacker trying to keep her kid sister safe - in particular. She's an outstanding character with a brilliant voice. (And on another side note, this is a great year for female narrators already! We've got one here, another in Tess Sharpe's Far From You, a third in Natasha Farrant's The Diaries of Bluebell Gadsby:  Flora in Love and TWO in Helen Eve's Stella!)

When sending those tweets, I hadn't realised that as well as being a brilliant author, Romily Bernard is also an incredibly generous person. She got in touch with me to discuss the possibility of a giveaway. I was thrilled when she suggested it and even more thrilled when she said that yes, she did know that I and most of my readers were in the UK and she was prepared to send books over here - how AMAZING is that? So, we ran one giveaway via the Bookbag yesterday - good luck to everyone who entered that; I'm eagerly waiting to see who wins! Another will be given away on the brilliant Snuggling on the Sofa blog. And to try and get your hands on the third, UK readers just need to RT the tweet embedded below before 11:59pm GMT on Thursday 6th June!

Have you read either of these books yet? What's the last book you read without knowing anything about it which turned out to be fabulous? I'd love to know, via the comments or Twitter!
- February 03, 2014