I've read some amazingly good historical fiction recently, so thought I'd do a quick round-up... 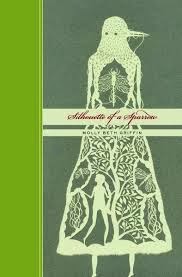 
It's the summer of 1926. Sent to stay with relatives in the lakeside resort of Excelsior, Garnet Richardson tries to amuse herself by cutting out birds from paper, a hobby of hers, but quickly gets bored. Then she meets the enchanting flapper Isabella, and her relationship with the more daring girl opens up a huge new realm of possibilities for her. But with marriage to her high school boyfriend awaiting her back at home, can she find the courage to be herself?

I read about this online on Saturday night and was lucky enough to find an import copy in the wonderful Foyle's Charing Cross Road on Sunday - I don't think it's out over here yet. I really hope that it makes its way over here properly soon because this is breathtakingly good. Griffin captures both the time period and the setting wonderfully, while the central relationship between the two girls is a tender one and Garnet is a great narrator with a lovely voice. Garnet's character development during the book is fantastic, too. The rest of the characters are all very well-rounded, as well, while there's an interesting subplot as Garnet tries to get her new employer at the hat shop where she first meets Isabella to stop selling hats bearing the feathers of birds. As for Griffin's writing style - wow! I was hooked within a few pages, she writes so beautifully. I even thought the chapter names, which were all those of birds and their Latin names, fitted the story and Garnet's character perfectly - when I first saw them I wondered if they were pretentious but once I started reading the book I realised that they fit Garnet as a narrator down to a tee.

I loved the ending, as well. I wasn't sure what to expect but think Griffin handled it brilliantly here. Massively recommended, a wonderful read. 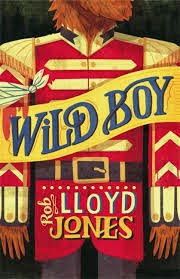 Title: WILD BOY
Author: Rob Lloyd-Jones
Obtained: Given to me by the lovely Fiona from Eventide Reads - thanks Fiona!
Why I Read It: I'm reading as many of the Branford Boase nominees as possible and trying to get round to them when/before they're featured on And Then I Read A Book.
Genre: MG historical adventure
Very Highly Recommended

Raised as a monster and sent to a freak show because of the hair that covers his body, Wild Boy is loathed and feared by nearly everyone, but has an incredible power of observation. When he's accused of murder, he's forced to run from the freak show and team up with circus acrobat Clarissa to try and clear his name.

Wild Boy's detective skills are fascinating - this will definitely appeal to the legions of Sherlock fans out there! - but it's also an action-packed adventure, while the uneasy alliance between him and Clarissa is fabulously portrayed. I loved the way it developed from the pair really disliking each other into being forced into respecting each other's abilities. In addition, the villains are well-written and there's a number of suspects as to who it is who's framed our hero - I guessed surprisingly early (by my standards; I'm hopeless at mystery-solving!) but was never very confident that I was right. What I really liked about the villains - and there's a few unsavoury characters here - is that all of their motivations were understandable and they felt realistic.

Add in some strong character development, particularly for Wild Boy, and a great ending which gives us a satisfying conclusion to this volume while setting up the upcoming sequel really well, and you have a wonderful read here. Of the Branford Boase nominations I've read, this is my favourite, shading out Poison Boy.

While Lloyd-Jones deserves a huge amount of credit for writing such a brilliant novel, publishers Walker should get nearly as much for turning it into such a beautiful book. It's got arguably the two best covers of all of the Branford Boase nominees - I prefer the hardback that I own, but the paperback is also truly gorgeous. In addition, the blurb on the back cover of both books is stunningly presented, in the manner of an old-style poster.

Overall, this is one to buy rather than borrow, both because it'll look lovely on your shelves and because it's one you'll no doubt want to reread. Really highly recommended. 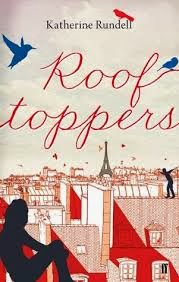 Title: ROOFTOPPERS
Author: Katherine Rundell
Obtained: Borrowed
Genre: MG/YA historical (it's borderline as to which it is, but readers of pretty much ANY age should really like this one.)
Why I Read It: I wasn't that keen on The Girl Savage, Rundell's debut, but thought she had a very promising writing style. I thought I'd see whether this was more to my tastes.

Very Highly Recommended
Sophie is shipwrecked in the English Channel on her 1st birthday, with her mother presumed dead, but she's lucky enough to be found by scholar Charles. He raises her as his ward and they have a happy, if seriously unconventional, existence until the authorities intervene on her 12th birthday. With the orphanage beckoning, Sophie and Charles run away to France in the hope that her mother may be alive after all.
Rundell's characterisation - which I thought was the weak point of The Girl Savage - is much stronger here. Sophie and Charles are both excellent, and the relationship between them is very touching - Charles has to be right up there with Atticus Finch as one of my very favourite fictional father figures. The children Sophie meets in Paris are very well-portrayed as well. The writing style which showed promise in that first book is more developed now and is stunning at times - I read this a few months ago (but have only just got round to reviewing it), before it was longlisted for the Carnegie, but it was clear even then that this was likely to be a favourite for several awards. It's beautifully written but never feels stilted. How about this for a description of a character?
"Think of nighttime with a speaking voice. Or think how moonlight might talk, or think of ink, if ink had vocal cords. Give those things a narrow aristocratic face with hooked eyebrows, and long arms and legs, and that is what the baby saw as she was lifted out of her cello case and up into safety. His name was Charles Maxim, and he determined, as he held her in his large hands—at arm's length, as he would a leaky flowerpot—that he would keep her."
The rest of the book is written in the same gorgeous style, and it's married to a clever plot, lots of excitement, and one of the most wonderful climaxes for a long, long time. It's also one that I think could open older readers' eyes to the amount of amazing books out there today. This feels, in so many ways, reminiscent of classics like Noel Streatfeild and Joan Aiken that I'd put it towards the top of my list of books to hand to readers who haven't read recent YA. An utterly heartwarming and uplifting book; I have a feeling that this will win the Carnegie.
- February 16, 2014