So when Annalie from Walker got in touch with the three of us to suggest hosting a simultaneous cover release for Joanna Nadin's awesome looking new book Eden, and new covers for her previous brilliant novels Wonderland and Undertow, I was hugely excited, and sent an e-mail back trying to stake a claim to the fabulous Wonderland. Luckily, I got it.

Check out this beauty... 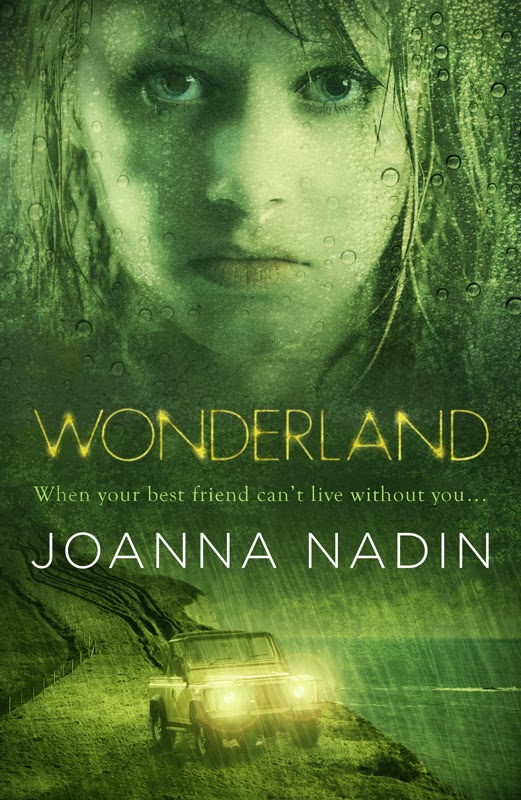 Blurb:
“I wasn’t always like this. Diminished. A shadow. Once I was as bright as she was. People took notice, because she was with me. Stella.”
The arrival of Stella brings excitement and danger to Jude’s dull existence. For the first time, Jude can be who she wants to be. But as her life spirals out of control, Jude uncovers a terrifying truth about who Stella really is...

Extract:
Be yourself, they say. Be whoever you want to be. Dad, Ed, Mr Hughes, Oprah bloody Winfrey. Like some crappy mantra. But they’re not the same thing. Not the same thing at all.
I look at my reflection in the rearview mirror. My hair packet-bleached and salt dirty, my eyes ringed in black, lips stained red. My hands on the steering wheel, white, the nail varnish chipped, weeks old. Then I look at the Point falling away in front of us. The wooden fence, broken from where we’ve climbed over it so many times. The ledge below, cigarette-strewn and soaked in lager. And the sea below that. A swirling, monstrous, beautiful thing. Alive.
Nausea rises in me again, bubbling up, insistent. I breathe in, pushing it, willing it back down again. I don’t know how we got here. How I got here. I don’t mean how I got to this place, the Point, but how I became the girl in the mirror. I don’t recognize myself. What I look like. What I’m doing.
I used to know who I was. Jude. Named after a song in the hope I’d stand out and shine. But I didn’t. Jude the ­Invisible. Jude the Obscure. Everything about me unremarkable. Nothing beautiful or striking, to make people say, You know, the girl with that hair, or those eyes. I was just the girl from the farm. The one with no mum. I knew what would happen when I woke up, when I went to school, when I came home. Who would talk to me. Who wouldn’t.
Until Stella. Now when I look in the mirror I see someone else staring back. I can’t see where I stop and Stella begins.
“We’ll be legend,” I say.
I watch Stella as she lights up a cigarette and drops the Zippo on the dash.
“Like Thelma and Louise,” she drawls. She takes a drag then passes it to me. “But without the headscarves or Brad Pitt or the heart-of-gold cop watching us die.”
And then I know she knows. And I know she won’t stop me. Because this is the only way.
“It’ll be very,” she says.
I take a long drag on the cigarette and, still watching myself in the mirror, exhale slowly. Shouldn’t be smoking, I think. But what difference does it make now? I pass it back to Stella. Then I let the handbrake off and the car rolls forward.

Firstly, isn't that extract awesome? Trust me, it gets even better from there...

And secondly, doesn't that cover look gorgeous, and fit so perfectly with the other two... what do you mean, you haven't seen the other two?

Oh, yeah. Head over to Sister Spooky RIGHT now to see Undertow's new look and read an extract, and then Books 4 Teens RIGHT AFTERWARDS to see the cover and read an extract from Joanna's newest book, Eden! (Or the other way around, of course.)

A massive thank you for inviting me to take part goes out to Joanna, and to Annalie at Walker! If you can tear yourself away from admiring these beautiful covers for long enough to hit Twitter, I highly recommend following @joannanadin and @walkerbooksUK