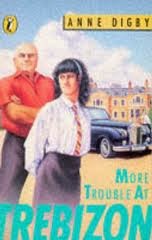 Number of books: 14, starting with First Term at Trebizon and ending with The Unforgettable Fifth at Trebizon

Availability: Out of print but the first ten are generally fairly easy to find cheaply second-hand. Also all fourteen are available at a nicely-priced £2.99 as ebooks. I have to say, though, the ebook covers are AWFUL. Especially for a series which had some gorgeous ones - my favourite editions being the ones in the same series as the book shown above.

The Premise: The series follows the school career of Rebecca Mason at Trebizon, a Cornish boarding school. As well as friendship issues and romance, she has a talent for tennis and a knack for getting involved in some mysteries every now and again.

Why I Really Like It: This is a really interesting series because I think in many ways it marks a bridge between the older 'Girls' Own' type boarding school books and the more modern reads such as Carmen Reid's. In particular, there's much more romance here - particularly between Rebecca and her best friend Tish's brother Robbie - than in most books that came before this era, but in many other ways it's very reminiscent of the classic GO books. Most notably, perhaps, are the wonderfully described sports matches, with tennis and hockey playing a big part in various books. It's also got strong characters who develop well over the fourteen books (or less than that, in some cases - my childhood heart was pretty much broken when prefect Pippa Fellowes-Walker left midway through the series), interesting teachers (especially surfer Max!), and they're quick reads - perfect for when you just want something light and refreshing.

Best Books: I think the older ones are significantly better than the newer ones - there was a four and a half year gap between the tenth and eleventh and while I wouldn't say you should actively avoid the last four, they're less to my tastes than the brilliant first ten. Of those 10, the top few would probably be First Term... to see where it all began, Second Term... for the Tish/Sue election warfare and More Trouble... which has new girl Lucy Hubbard and the brilliant Greek bodyguard Papa (that's him glowering on the cover above!). Oh, and maybe Into The Fourth... for the wonderfully chilly Ingrid the Ice Queen.

Who It Will Appeal To: I think anyone who likes school stories will enjoy these ones.

Others By The Same Author: Digby was rather prolific in her heyday, with the Trebizon series, the Me, Jill Robinson series, A Horse Called September and The Big Swim of the Summer, amongst others, all being popular. It seems a little sad that the only ones of her books you're likely to stumble across in a new bookshop are her continuations of Enid Blyton's Naughtiest Girl series rather than ones featuring her own characters, but that's not to say they're not well worth reading in themselves.
- January 23, 2014