Special Recommendation: The Burglar Who Counted The Spoons by Lawrence Block (adult crime)

The plan for 2014 is to write a little more about the adult books I enjoy, so I thought I'd kick things off a few days early after reading this brilliant novel, released today. 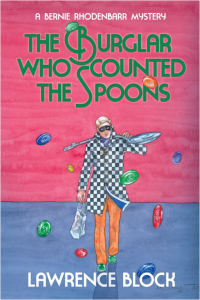 
The return of Lawrence Block's wonderful burglar,Bernie Rhodenbarr, 9 years after the tenth novel in the series, was my most-anticipated book release for an awfully long time. It is an absolute pleasure to report that the character has lost none of his charm, Block's writing is as superb as ever, and the plot is as ingenious as in any of the previous  10. I say that having reread them all this year - the last five over the previous few months. This is up there along with The Burglar Who Thought He Was Bogart as my favourite in the series.

Block mentioned in an interview recently that there was a lot here that fans would find familiar - Bernie and Carolyn meeting up at the Bum Rap, Bernie getting involved with lovely young women, and of course the traditional scene in which he draws all of the suspects involved with several crimes - and possible crimes - and utters the immortal words "I suppose you're wondering why I summoned you all here."

Stating it like that makes it seem like a formulaic series, and in some ways it perhaps is. But who cares if Block's writing to a formula when the formula is this consistently entertaining? Bernie, his best friend Carolyn, and Detective Ray Kirschmann are a wonderful trio, Bernie's voice is so strong that he's one of my all-time favourite narrators, and I always enjoy trying to guess whodunnit even if I'm nowhere near good enough to get the solution before Bernie reveals it.

Anyway, while they're all similar in many ways, it would be wrong to suggest they were all that similar. I think one of the most interesting things about the series is the way the relationship between Bernie and Ray - the best cop money can buy - has developed. After the early books in which Bernie generally ended up needing to solve the case to avoid Ray arresting him, the last few novels have seen them as far more of a friendly duo, with Ray barely even pretending Bernie's a serious suspect any more and instead working with him as more of a partner.

Another interesting thing here is that the changes in the bookselling world since 2004 are addressed - there's a delightful scene early on when a young woman browses in Bernie's bookshop to find a novel she couldn't remember, then happily informs him that she's now bought it on Kindle for her phone. Meanwhile, Bernie's former book supplier Mowgli is now buying books from him and selling them over the internet. Ray refers to "Mrs Rhodenbarr's boy" as the "last of the gentleman burglars," but it's clear from Bernie's business dealings that the future of booksellers could be even more bleak than that of this class of criminal. Considering it's a book that many people will be reading on e-readers, it's one that will hopefully remind people just how important it is to frequent your local bookshops every now and then.

So, will Bernie's bookstore survive these changes, and will he continue to burgle and solve crimes? A few years ago, I wasn't expecting to ever read another Rhodenbarr book - at least not for the first time - but I really hope that this won't be the final time that he utters that classic line of his.
Hugely recommended.
- December 25, 2013