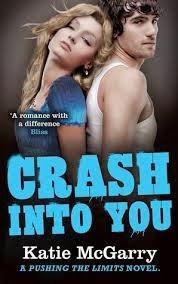 This is the second companion book to McGarry's stunning 2011 debut Pushing The Limits, following last year's Dare You To. In the wonderful Pushing The Limits, we were introduced to main characters Noah and Echo and an excellent supporting cast including Noah's best friends and surrogate family Beth and Isaiah.

In this, Isaiah is out of foster care (without the system's knowledge) and living with Noah, but the pair are broke, driving him to a desperation agreement to drag race illegally for the sleazy Eric. After a chance encounter with rich girl Rachel, he falls for her hard, but they have more to worry about than just romance. Eric is pressuring them to give him money he feels they owe him, and Rachel has problems of her own at home she doesn't want to share with anyone. Can the couple find happiness and avoid the wrath of Eric?

I loved Pushing The Limits as it had an outstanding set of characters and sizzling chemistry between the two narrators, and enjoyed Dare You To because the chemistry was just as good, but felt that the supporting characters (especially the adults) were weaker. This is, for me, the best of the three, as it has that same fabulous chemistry along with a huge number of interesting, well-rounded characters whose personalities and relationships with each other are completely believable. While Rachel seems from the outside to have the far more settled family, with four brothers and a mother and father, it's quickly apparent that their bond isn't as strong as that of Noah and Isaiah, who aren't related but see themselves as brothers. Still, there is a bond there, and while they frustrated me as the entire family struggled to deal with the grief from the death of Rachel's sister Collen, who died before she was even born, I could completely see why they had so many problems dealing with their issues and talking to each other.

There are other really interesting relationships beyond the romantic and family ones, as well - I love the interaction between Rachel and teen drug dealer Abby, one of Isaiah's friends, and really enjoyed seeing Dare You To's Logan play a part in the book, and the interplay between him and Isaiah in particular. As well, while the adults don't seem to feature that much, they're all compelling characters who can make boneheaded decisions (as can the teens) but who do so in a way that seems to fit their character perfectly.

Going back to the stunning chemistry I've seen insta-love criticisms, but despite the speed of their attraction to each other, it didn't cross my mind when reading it because it feels incredibly well developed despite the short period of time it takes place in., The heightened stakes of the drag racing, the problems with Eric, and Rachel's panic attacks mean that the quick progression of their romance seems to make sense.

What perhaps impresses me most about McGarry is that while the basic premise is similar for all three books - dual narrative YA contemporary romance between two teens with severe issues - they feel very, very different. She seems to have far more skill in differentiating her plots and characters than many similar authors do, and I'm already eagerly anticipating the 2014 release of her fourth novel, which follows Rachel's brother West.

Very highly recommended to all fans of teen contemporaries.

On a side-note, if you haven't read the first two books, Pushing The Limits is currently just 20p on Kindle and Dare You To is £1.19! 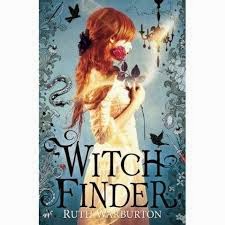 Ruth Warburton brings us more tales of witches with this 1880-set novel. I really enjoyed both of her first two novels in the Winter trilogy, but have somehow never got round to book 3, A Witch Alone. (I'm making it a New Year's resolution to read it ASAP.) This is written in third person and split between the points of view of Luke, an apprentice blacksmith who wants to be initiated into the Malleus Maleficorum and needs to pick a witch's name at random to kill, and Rosa, the 16-year-old witch whose name he picks.

This has two very compelling characters in Luke and Rosa, and several horrendous villains - notably Rosa's brother Alexis and his friend Sebastian, who Rosa is expected to try and win the heart of. I liked both Luke and Rosa, and found Luke's desire for revenge against the witch who killed his parents and Rosa's struggle to be who she wanted to be rather than a pawn in her family's game to be good stories. That said, while I enjoyed them as individuals, I didn't think the romance between them was as well-written. Luke seemed to go from being determined to kill her to falling hard for her far too quickly, and I thought this did scream 'insta-love' to me.

There's still a lot to like here, though - Warburton brings London in the late 19th century to life well, it's cleverly plotted, and Warburton's writing style is, as ever, easy to read. Also, the ending makes me look forward to book 2, Witch Hunt - it's a satisfying conclusion to this story but sets up what should be an even better conflict in that novel.

Recommended to fans of historical and/or paranormal, in particular people who've already read and enjoyed the Winter trilogy.
- December 24, 2013