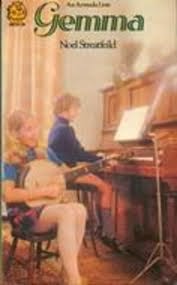 Number of books: 4, with 2 published under various titles.

They seem quite difficult to get hold of, compared to many Streatfeild, which is a real shame. Ebay/second hand bookshops appear to be your best bet.

The Robinsons are perfectly normal, thank you very much…

Oh, wait, I think I’m getting confused with a future post there. Anyway, the Robinsons ARE perfectly normal (except for Lydia, who’s dance-mad, anyway.) There’s two parents, daughters Lydia and Ann, and son Robin. The not-so-normal thing about them is that their aunt Rowena and cousin Gemma are famous film stars. But then Rowena writes to say that Gemma has become the wrong age for films, at 11 – no longer a child star but not ready for older movies – and asks them to let her stay with them. Gemma moves in and has to try and be part of a big family for the first time ever, and cope with her fears about school, while also hide her identity as she doesn’t want people to think she’s “washed up.”

Why I like them
Rather than the good, sweet, kind-hearted girls I was used to reading about when growing up, Gemma is a complete brat for a fair amount of the first book, and for parts of the others. She’s a flawed character, but far more interesting than the majority of heroines from this time period. Lydia is even more flawed, being basically interested almost solely in dancing to the point of lying through her teeth if it helps advance her career, but is just about likeable enough that you can forgive her, while understanding her parents’ frustration.
Speaking of her parents, I also think the adults here are more rounded – and more present, for that matter – than in most books of the era. Alice and Philip, the Robinsons’ parents, along with Gemma’s mother, and dance school teacher Miss Arrowhead and her niece Polly are all great characters. And the couple who run the West Country farm they stay at in one book are gems. (And give us such wonderful dialogue as “Sweetly pretty it do be.”)

I’m also fascinated by the stage and think Streatfeild does a great job here of portraying the worlds of the theatre, TV and movies. In addition, it’s interesting that there’s real changes as the characters grow up – so many mid-20th century series seem to have their main characters locked at the same age forever, but my favourites have always been the ones like this where they grow older and have to cope with new experiences.

I think the first two are superb, personally, and the others are good but not great.

Who they’ll appeal to

Anyone who loves reading about the stage will like these. I think fans of Lyn Gardner’s Olivia series would feel at home, in particular.

Books by the same author

Tons and tons! Ballet Shoes is of course the most famous. (And has led to a bunch of others being reprinted as Something or Other Shoes.) The Painted Garden is another favourite of mine. (That would be Movie Shoes in some editions, which makes me want to bang my head against a wall.)

Thurday’s Child and Far To Go are both excellent from what I remember, as is her semi-autobiographical trilogy the Vicarage books.
- November 26, 2013