I was wandering around various London bookshops today after watching the film of How I Live Now (sadly disappointing) and stumbled on a real curiosity - Ask A Policeman, by six members of The Detection Club. 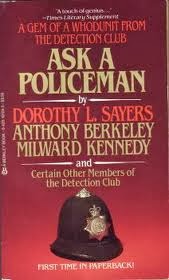 The Detection Club, for those who haven't heard of them, were (according to Wiki, in fact, still are!) a group of mystery writers in 1930s England. They collaborated on this novel - as well as a few others. This one sees the murder of a barbarous newspaper tycoon, with the Home Secretary inviting four famous detectives to try and solve the case without asking a policeman. After the set-up by John Rhode, Dorothy L. Sayers, Anthony Berkeley, Gladys Mitchell and Helen Simpson took over to write the adventures of their four detectives as they went about solving the case - the twist being that they swapped characters, so Lord Peter Wimsey, for example, was written not by Sayers but by Anthony Berkeley.

I didn't get it - partly because it's had great reviews for the skilful way in which the authors parody each other, so I think I'd like to read some of the original stories by Simpson and Berkeley before reading it. It did get me thinking about collaborations though, and brought to mind a comment made by Phil Earle at the wonderful event on Wednesday night in which he interviewed David Levithan. Levithan, of course, is well-known for working with Andrea Cremer, John Green and Rachel Cohn, in addition to his acclaimed solo novels. Phil mentioned this kind of thing is quite rare in the UK - which got me thinking, who would I most like to see team up?

In no particular order

1. Andy Robb and Holly Smale. A no brainer, surely? They're frequently doing Geekathons together (which I keep missing - argh!) Surely they must be doing some writing? I'd love to see Archie and Harriet meet!

2. Keris Stainton and Keren David. The pair run the wonderful UKYA site together, along with Susie Day. Susie and Keris probably seems like a more predictable fit, but I'd love to see Keren's hard-hitting thrillers mixed with Keris's wonderful romances.

3. Rosie Best and Laura Lam. (Before anyone says anything, I know Laura's from California, but she lives in Scotland so I'm including her somewhat dubiously.) I love Strange Chemistry as an imprint as they keep putting out fantastic books. Rosie Best's Skulk and Laura Lam's Pantomime are my two favourite yet, both with vividly drawn worlds and great narrators. I'd love to see what they could come up with together!

4. Curtis Jobling and Will Hill. These two have been responsible for more sleepless nights than any other authors, I think, because I routinely spend about five days before getting my hands on a new Wereworld or Department 19 book thinking "Oh wow, nearly here!" I'd be intrigued to see what they came up with together.

5. Susan Cooper and Jenny Nimmo. The authors of two of my all-time favourite children's fantasy series (The Dark Is Rising and The Snow Spider), which I loved back in the 1980s, are still going strong all these years later. There's been a marked lack in fantasy books set in my home country of Wales over the years since those two fabulous series were published - it would be incredible to see the two of them put this right with a joint effort. (Oh, and someone may point out that if I'm including Laura Lam as she lives in Scotland, I probably shouldn't count Cooper, born in England but now residing in America. Tough, I'm greedy!)

So, what would everyone else's dream UKYA collaborations be? Leave me a comment!