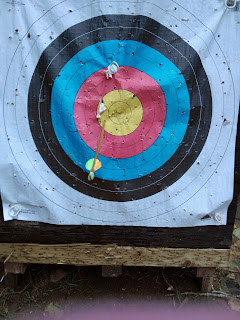 Here's the second in my new 'My Week in London' feature. This week it's dance dance dance!

Tuesday saw me head to the South Bank to see Nobulus's Out of the Shadow show. I'd been really looking forward to this, billed as a mix of "breakdance, popping and locking, contemporary dance, acrobatics and ballet". I was rather disappointed, though. The show took us from the creation of the Earth to an imagined post-apocalyptic future. It's an ambitious offering from the ten-strong Austrian collective, who play not just the parts but also form the set from their own bodies, but not many of the dances worked well for me. The good stuff for me was a strong solo in act 1 from lead and choreographer Alex Wengler, and a wonderful more traditional dance between him and Eleni Arapaki. Oh, one thing that I did like was the superb soundtrack, which covers everything from classical to more modern music. Also Sprach Zarathustra was a particular highlight for me - but it's a worrying indication of a dance show that I'd possibly have enjoyed it nearly as much with my eyes closed.

Rather a better night on Wednesday, with the highlight of the week for me, a trip to Sadler's Wells to see a triple bill of one-act David Bintley ballets from the Birmingham Royal Ballet. (And it was a bargain, as well! £12 each for seats for this and Sleeping Beauty on the Saturday, with 20% off due to buying them together, making the total cost of the two nights - including a very comprehensive and informative programme which covered both nights - just £25.20.) I wasn't planning on going to this one at first but realising that it would only be an extra £7.20 compared to just seeing Sleeping Beauty, finding out that Brandon Lawrence, who I really liked at the Yorkshire Summer School gala a few weeks ago, and reading a fabulous review over on BalletCoForum persuaded me.

For me, e = mc2, representing Einstein's famous equation through dance, was the least to my tastes, although I enjoyed it more as it went on. The opening with so many pairs wonderfully in time was really striking, and third piece The Manhattan Project was very well danced by Samara Downs and stood out as something different, with its ominous soundtrack. Celeritas2 was very good, particularly Miki Mizutani and Max Maslen as the leads, while the second part, mass, was the one I enjoyed the least.

Tombeaux, Bintley's homage to classical ballet, made when he was about to leave the Royal Ballet in 1993, was more to my liking. Jasper Conran's striking costume designs - I thought the blue/black tutus were gorgeous - helped it immediately grab my attention, and there were several dances I really liked, with the standout being Nao Sakuma's dance with Yasuo Atsuji, Brandon Lawrence, Tom Rogers and Benjamin Soerel.

As for Still Life at the Penguin Cafe - wow! Easily worth the price of admission alone. This is Bintley's 1988 ballet featuring a host of endangered species taking part in vignettes. I thought it started brilliantly, with Great Auks as 1930s waiters, and got better and better, at least until The Ecstasy of Dancing Fleas. (Not to say anything after that wasn't brilliant, it was just that Karla Doorbar's Flea causing chaos for the five morris dancers with her were so sensational nothing else could quite match them for me!) Having said that, Mathias Dingman's flamboyant Monkey came very close, while the final scene was surprisingly emotional. Earlier on in the ballet, Maureya Lebowitz made a delightful Ram, and James Barton's hoedown as the Texas Kangaroo Rat was superb. I also thought the costumes for this were simply breathtaking, and the music was utterly gorgeous.

On Friday, we took a college trip to an outdoor activity centre. I generally avoid discussing work on this blog, but I'll make an exception to say that I was delighted to be in charge of 8 absolutely fantastic students, and thrilled to get the chance to take a shot at archery - turning out to be rather better than I'd hoped to be. The above photo shows the remnants of a balloon which had been covering the gold part of the target until I burst it with a wonderfully aimed/incredibly lucky arrow. (Delete according to how generous you're feeling!)
Come Saturday morning, I headed into London, and bumped into Liz de Jager, author of the upcoming The Blackhart Legacy, and Sarah (esssjay on Twitter). Having nearly met Liz a few months ago at the Strange Chemistry event but being too shy to introduce myself at the time, I actually managed to say hello this time and it was brilliant to be able to discuss YA in person with a couple of people. After that, I headed to the Real Food Festival on the South Bank to treat myself to a gorgeous beefburger from Woodwards Farm - surely the nicest in London, for just £4.50 - then to Sadler's Wells. At the Wells, I saw the aforementioned performance of Sleeping Beauty. This was the first full-length ballet I've seen and to be honest, for the first ten minutes or so of the prologue. I wasn't sure I was going to enjoy it. Things picked up for me with the fairies dancing - I was thrilled to see Karla Doorbar again after loving her as the Flea on Wednesday night, and she didn't disappoint, being wonderfully expressive. (I wish her solo had been longer, though!) The other standout of the six fairies for me was Maureya Lebowitz as The Fairy of Temperament, who was brilliant, especially her pirouettes. (I'm not 100% sure they were pirouettes, but I posted an earlier version of this on BalletCoForum earlier and no-one's asked me what on earth I'm talking about, so I'll hope I've got the right term there!)

Things really picked up, though, with the entrance of the wonderfully malevolent Marion Tait as Carabosse. The lighting was great, and Tait and her 6 attendants were superb - really projecting an aura of evil.

I also enjoyed the charming garland dance in act I, and thought that Elisha Willis was a captivating Aurora, grabbing the audience's attention from her first steps. I loved her Rose Adagio, the wonderful conclusion to her first solo, and thought her final solo of the act - going from childish delight at her 'new toy' the spindle, to pricking her finger, starting to recover, and eventually collapsing - was stunning.

Act II was perhaps less to my tastes - I found Jamie Bond hard to connect to at this point (although he grew on me, and I really enjoyed his grand pas de deux with Willis near the end of the ballet), but act III had some wonderful dancing. Having said that, I thought it was on the long side - but the pas de quatre was beautiful (especially as it gave me another chance to see the brilliant Karla Doorbar, while Miki Mizutani, Lachlan Monaghan and Lewis Turner were all really good in it as well), and Laura-Jane Gibson and Valentin Olovyannikov as Red Riding Hood and the Wolf were my favourite of the pas de deux. (Apart, of course, from Elisha and Jamie to close.)

Overall I definitely enjoyed it and will be going to see more classical ballet in the future - Birmingham Royal Ballet are certainly a company I'd love to see again.
- October 20, 2013