When Templar approached me to ask if I was interested in running an interview with Julie Berry, author of All The Truth That's In Me, I jumped at the chance. However I was't expecting my new job to take quite so much time, so I was struggling to get questions written - luckily Georgia from Books and Writers JNR was able to help out by giving me a couple of questions after I bumped into her at a book signing for the wonderful James Dawson! 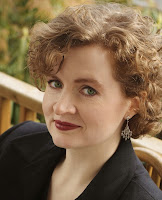 I imagine a girl reading the book secretly, curled up in her bedroom, or hiding in a nest of blankets on her couch when no one is home. She’s in her pajamas, sans makeup or hairdo. If she wears contacts, right now she’s in her glasses. She’s all alone, so that she can immerse herself completely in her story, and so that she’s not encumbered by wondering how others see her or what they think of her. Appearance, reputation, and popularity don’t matter here. It’s just her, the book, and me.


2. I thought that Judith's voice was an interesting one - who are your favourite narrators in YA fiction?

[I’m going to pass on this one, only because I’m so desperately behind in my YA reading that my answers won’t seem very current. Eek.]


3. As well as Judith's voice, All The Truth That's In Me has a highly original plot and setting. Which did you think of first, the girl unable to speak, or the society where she lived?

Judith came first, but the world she inhabited followed close behind. They’re so deeply connected here. If Judith had lived in a different world, I hope she wouldn’t face the same silencing. If she lived in another world, perhaps this wouldn’t have happened to her in the first place.


4. One more question about the writing style - it's split into numbered sections, many of which are extremely short - I've seen a couple of reviews which compare them to Biblical verses. What made you decide to break up the narrative like this?

I needed a way to separate and designate these short sections, one that felt timeless and didn’t draw a lot of attention to itself. Arabic numerals felt too modern, almost technical, but Roman numerals just felt right. People have asked me since if I was thinking of how volumes of poetry are sometimes organized. I wasn’t consciously, but perhaps unconsciously. It’s not a novel in poetry, but I like that association.

5. You've written several books for slightly younger readers prior to All The Truth That's In Me. Is there anything different about the way you write for teens?

When I write for younger readers, whimsy and imaginative play informs a lot of what I do, though serious drama and tension can appear. When I write for teens, thus far I’ve allowed myself to delve more deeply, more seriously, into emotionally raw situations, though whimsy can also appear. The same elements are there each time; it’s a question of proportion.


6. Looking at your blog, I love the bookmarks your sister, the incredibly talented illustrator Sally Gardner, has designed for you, and the discussion about how they're created is fascinating. Is working with your sister easy, or do you argue?

Thank you! I love those bookmarks too. Sally and I get along really well creatively (and in other ways). We both have strong personalities and very clear ideas of how things ought to be, but were also very respectful of each others’ abilities and input. I love collaborating with Sally, and hope to have lots more opportunities to do so.


7. Do you listen to music when you write? If so, what was the soundtrack for All The Truth...?

I’m a silent writer. Coffee shops bug me as writing sites because it’s hard for me to tune out the music. I love music, which is probably why it distracts me. I want to enjoy it if it’s there, but that makes it hard for me to focus on my work. For me, the essence of good writing is listening to what your creative mind has to tell you, and (again, for me), listening favors silence.


8. While writing this interview, I bumped into fellow book blogger Georgia, of the fabulous Books and Writers JNR site, and as I knew she loved All The Truth... asked her for a couple of questions. She'd love to know why you chose the writing style that addressed the reader as one of the characters?

Hi Georgia! The “you” in the narrative was always Lucas, to me, and I liked the mystery readers would face of figuring out who Lucas is and what he means to Judith. But I also like it that readers are forced early on to identify with Lucas because they share “you” with him. Since they’re already inside Judith’s head, identifying with her isn’t hard. In this way I hope to achieve a closeness with both characters.


9. And also from her - if you can answer it without spoiling things, feel free to ignore if you can't! - what do you imagine happens to Judith after the next page?

(ANSWER CENSORED BY JIM! Highlight the line below to read.
Heh heh heh … Well, they just got married, right?

More exercise would be good, and maybe a bubble bath now and then. My house is in desperate need of cleaning. Creatively, I have my hands in a couple of different projects at various stages, including a YA I’m working on for Viking (the US publisher of All the Truth That’s in Me). Details haven’t yet been announced so stay tuned!

Thanks for taking part in this interview, Julie!

Julie Berry can be found on her website - All The Truth That's In Me is published by Templar Books, who can be found here.