Handing over to Lauren Lucien this week - many thanks, Lauren! 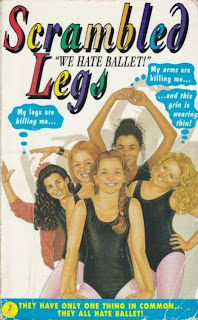 Number of books:Ten in the series.Availability:Definitely a few copies on eBay. I came across mine by chance in charity shops and car boot sales.The Premise:Five young misfits are forced to attend Deerfield Academy Of Dance and the only things they dislike more than this are their uppity classmates affectionately named The Bunheads.

As much as they try they can't escape and through their trials and tribulations they grow to appreciate the academy, themselves and even learn a pirouette or two.Why I Really Like It:I was obsessed with ballet books (The Drina Series by Jean Estoril and later, even Angelina Ballerina) and I really wanted to be a ballet dancer but couldn't afford to keep up with classes and exams. Reading the brilliant detail and recreating the sound your ballet slipper makes sliding into third position across the floor, the awkwardness of a leotard when you get older, trying to force frizzy hair into a bun, longing for pointe shoes... Scrambled Legs was the next best thing and it had those old school likeable stereotyped characters laced with heaps of American sarcasm and sassiness that I've never stopped being drawn to - Paula Danziger anyone?Best Books:It's got to be Battle Of The Bunheads (Book Two) which features the gang once and for all standing up to the notoriously snobby and scheming 'Bunheads' oh and there's the fiasco surrounding the purchasing of Gwen's first bra...Who It Will Appeal To:Primarily 8-12 year old lovers of ballet, underdogs and strong female characters.Others By The Same Author:The 'author' Jahnna N. Malcom is actually two people, a couple called Jahnna Beecham and Malcom Hillgartner and according to my research they've written over one hundred books as well as other media.