I'm trying to take some time away from talking about current books, for various reasons, so thought it would be a cool time to take a look at some older books and series. Here's the debut of my new feature, Classic Children's/YA Books. (If it looks familiar, that might be because it owes something to my Hidden Gems of YA Contemporary feature on the other blog!) 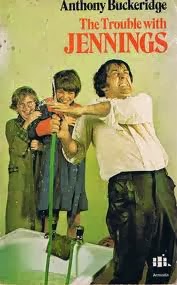 
Availability: Prion brought out a hardback of the first four, which include probably two of the three best, Jennings Follows A Clue and Jennings' Little Hut. Other than that, The House of Stratus reprints from 2008 are your best bet of getting new books. There's also a decent supply of second-hand ones on eBay and similar sites.


The Premise: Jennings and his best friend Darbishire are two youngsters at Linbury Court Preparatory School. The series follows their misadventures through various school terms.


Why I Really Like It: Partly due to nostalgia - they were the first books I can recall my dad reading to me, and I always remember being excited when I went to Llangollen library as they had an absolutely gorgeous set of hardbacks. However, on rereading there's still a lot to like even without the nostalgia factor. Jennings - lively, well-meaning and loyal to his friends - and Darbishire - studious, cautious, but constantly following Jennings to try and stop him getting into more trouble - are great lead characters, and the teachers and fellow students are all good as well. Old Wilkie, who has a heart of gold but keeps it very well hidden, is the most entertaining of the staff, while Mr Carter is the teacher I'd have loved to have had myself. They're also hugely entertaining with several laugh-out-loud moments in each book. Jennings and Darbishire joining a search party looking for themselves, catching a bus on a cross country run, and trying to deal with an inspector of unknown provenance are just three of the scenes which, even on ninth or tenth reading, never fail to make me giggle.

Then there's the wonderful language. Mistakes are 'frantic bishes', surprising events are greeted with the exclamation 'fossilised fishhooks', or something similar, while it's a sure bet that the member of Jennings' form will cause Old Wilkie to launch into a 'supersonic bate' at least once in each book.


Best Books: Jennings Follows A Clue - Jen and Darbi set up their own detective agency, to much derision from their friends. Can they emerge triumphant against all the odds?

Jennings' Little Hut - The new craze at Linbury Court is huts the boys have built near the pond in the grounds, Just how this leads to Jennings taking a goldfish for a walk is something I can't quite explain - but it's well worth reading.

Jennings At Large - The 23rd book (and last for over a decade) sees most of the regular cast ditched for the middle part, as Jennings goes to stay with absent-minded Aunt Angela and meets Emma Sparrow, a young neighbour of hers. The duo turn out to be a brilliant comic pairing.


Who It Will Appeal To: I think fans of humourous fiction for younger readers would love these books - Dougal Trump springs to mind as perhaps the closest modern equivalent that I've personally read. (Feel free to suggest others!)


Others By The Same Author: Buckeridge's five-book Rex Milligan series is similar stuff, but set in a day school instead of a boarding school. Not up to Jennings, in my opinion, but still worth a look if you can track them down.