(Note: I was provided with a copy of this book by the author in exchange for a fair and honest review - arranged before I switched from my review policy to my recommendation policy.) 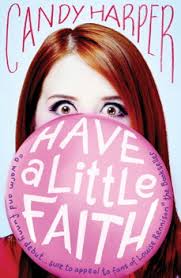 Faith has been moved into a different form to separate her from her friend Megs, as the teachers seem to think they're a bad combination. On the plus side, the school are bussing in cute boys for their choir - and Faith is ready to get to know the dreamy Finn a lot better. Until she realises he's singing a duet with her sworn enemy, at least. Can Faith get the boy? And will she be able to move back into the same form as Megs by impressing Miss Ramsbottom with her new found maturity?

I sometimes make a note of page numbers with particularly good quotes on them, and started doing that with this book, but gave up quickly. Apart from anything else, the amount of consecutive numbers I had written down made it look like I was trying to learn to count! A couple of my favourites - Zoe's question to Faith "Is this one of your mad schemes that seems like a justifiable act of revenge against the evil rulers of this school, but ends in utter chaos, destruction and occasionally hospitalization?" and Faith's gran's sage advice on choosing between two boys "Find out what their fathers do. I don't want a coal miner in the family."

While there are some hilarious lines on nearly every page, it's Faith's voice in general, and the wonderfully warm characters, which had me hooked on this. Faith herself is a brilliant creation - heedless and bossy at times, but with her heart in the right place - while her friends and the boys they're interested in are all well-developed. (Lily, who's a little on the dozy side, would steal the entire book from the vast majority of narrators - although worryingly, I was starting to think I'm on a similar wavelength to her. I think the water in the sea SHOULD wash away the fishy smell...) Of the boys, the stand-out is Westy, whose bravado and constant attempts to impress the girls are painfully on the nose. The adult characters are really good as well, especially Faith's gran, who's also looking for love.

Having said that, the romance isn't as much of a focus as you'd perhaps expect from the plot summary, and the book's all the better for it. While Faith trying to get together with Finn is a recurring theme, we also have her dealing with friendship issues within her group of mates, trying to plot increasingly complicated revenge on her teachers, and cope with a rivalry with Vicky 'Icky' Blundell. I think that despite the rather pink cover, the humour in this one and Faith's brilliance as a tough, feisty central character means that boys as well as girls will really enjoy it.

Part of me wishes I was still teaching in a secondary school rather than a college as I know that a lot of my Year 8 form from last year would absolutely adore this, but part of me's thinking that it would have got very expensive - I know I'd have ended up buying an extra five copies to stave off the inevitable arguments from people who didn't want to wait to read it!

A complete gem, and an absolutely massive recommendation. Read it now! (But probably not on the bus or train, as you're likely to end up laughing hysterically and get some strange looks! Book two in this series jumps to very near the top of my 'most wanted' list.
- August 01, 2013