Thursday Thoughts: Book Recommendation of The Summer of Telling Tales by Laura Summers 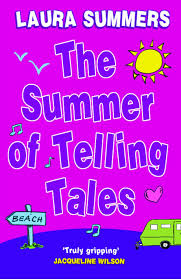 Grace and Ellie are at the seaside with their mum. They're not on a holiday, though - they've escaped from their domineering and abusive father. As the two settle into a new school and make new friends, Grace - who only ever speaks to Ellie - meets someone she can be herself around, while Ellie reinvents herself as Elle, a confident and popular girl instead of the shy and scared youngster she used to be. But can they ever be free of the shadow of her father?

I got this last week for Kindle - it's 99p at the moment - and started reading it on the train today because I wanted a fun light read. (For those of you who've read the summary above and are wondering what on earth I was thinking; it's got a cover which looks much cheerier than the book is! Also, I didn't read the blurb.) Despite it being nothing at all like I was expecting, and not a book I'd have thought I was in the right mood to read, it left me absolutely stunned. It's in turns tense, fun, scary and life-affirming, and it's up there with Twerp as the very best of the year for younger teens for me.

Grace and Ellie, who narrate alternate chapters, are wonderful creations - sympathetic without ever being too good to be true - and the way they both react differently to finally escaping from their father's cruelty is beautifully portrayed. I loved seeing them find happiness in different things, but appreciated that it was never easy for them and they struggled to recover from years of living in fear. Their mother's character is just as well-handled, and as a teacher myself, I really appreciated the strong, believable portrayals of the two teachers who play the biggest part in the book. Both have their hearts in the right places but are capable of making mistakes. Oh, and the love interest for Grace is absolutely adorable, while his family are vivid.

Speaking of family, the dynamics between Ellie, Grace and their parents feel incredibly realistic. Their father is all the more horrifying because we see moments in flashbacks when he very briefly seems to be as good a father as the image he portrays to the outside world, and the younger Ellie, in particular, is fooled into thinking that he could have changed. I also thought another relationship, between two of Ellie and Grace's fellow students, was exceptionally well-written.