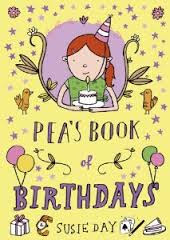 It’s a busy month for Pea and her family, with four birthdays! Clover has an Alice in Wonderland-themed party to celebrate her upcoming starring role in a play, Tinkerbell has a magician booked for hers, but what kind of party could Pea have? What she wants most of all is to have her long-lost father appear… could her wish possibly come true?

I’m a huge fan of the Pea series, despite being rather older than the intended audience, because Susie Day always manages to make her books feel timeless and fresh at the same time. While there are modern aspects to Pea’s Book of Birthdays, like Pea starting to try and find her dad using the internet, a lot of the general themes of the book are the same that have always been popular in children's fiction. The Noel Streatfeild comparison I've made about the other two books in the series still seems to hold true here - as in Streatfeild classics like Ballet Shoes, the relationship between the three sisters at the heart of the story and their mother is fantastic.

It's also refreshingly hard to predict for a book of this sort. I can generally tell what's going to happen quite early on when reading books for the 8 - 12 age range, but I couldn't guess what Pea's party would be here. (Which is perhaps a sign that I'm not as sharp as I used to be; as soon as it was revealed it was obvious that it was the perfect party for her!)

Highly recommended as another superb entry in one of the best series out there for younger readers.
- July 04, 2013