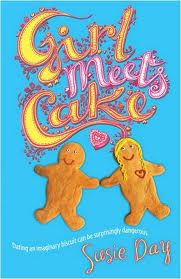 Fifteen-year-old Heidi gets fed up of being the only single one when all her friends start coupling up. They're all thrilled to hear that she's got together with Gingerbread Ed, who's sweet, clever and seriously sexy. The only problem is, Ed's a figment of Heidi's imagination. So when her friends get in touch with him over the internet, things get messy very, very quickly...

I picked this up from the library because I was looking for something to rekindle my interest after a run of a few bad books, and while I love Susie Day's stunning Pea series even more than her books for teens, her YA stuff is consistently good. So I went into this with high expectations, and was glad that it completely smashed them.

I think my favourite thing about her writing is that she captures the way most teens talk on the internet in a way that relatively few authors do. I see loads of chats, e-mails, and so on which seem - given my experiences as a teacher who has occasionally been called on to deal with cyberbullying, etc - to be unlike anything I've seen in real life. Susie Day, though, gets the voice of her characters perfectly right. I think the only other teen author I can say that about when it comes to e-mails, Facebook and the like is probably Jenny Smith.

And they're fun characters, as well. Heidi is the stand-out, but her friends are well-developed as well, her boss at the cafe is lovely, and the mysterious boy who starts e-mailing her is cleverly done. (I feel quite proud of myself for quickly guessing who the boy was. I'll try to ignore the fact that I changed my mind about half a dozen times when reading it, before the final reveal, though!)

Oh, I'd also rush out and buy DVDs of the Mycroft Christie series - a detective series whose central character Heidi has long, rambling imaginary conversations with - and the 80s set school musical version of Twelfth Night in a heartbeat!