(I was provided with a copy of this book by the publishers in exchange for a fair and honest review.)

SPOILERS BELOW for Vixen and Ingenue, the first two books in the Flappers trilogy. 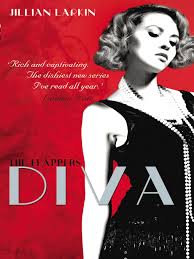 Clara Knowles and Lorraine Dyer are both devastated by Marcus Eastman's upcoming wedding. Can either of them stop it? Meanwhile, Gloria Carmody is socialising with business mogul Forrest Hamilton, as befits an icon of flapperdom. But it's not just pleasure for Gloria - if she can get some information about Forrest for the FBI, her future with boyfriend Jerome could be a bright one. If not, she could be back in jail in the blink of an eye...

As virtually anyone I talk to about books knows, I've been having issues with lots of recent reads. Almost everything I've read in the past couple of weeks has seemed jam-packed with unlikeable characters I couldn't bring myself to take much of an interest in. Because of this, the arrival of the final book in Larkin's superb trilogy was even more welcome than it would have been otherwise. Gloria, Clara, and Lorraine are a simply wonderful trio. That's not to say they can't do anything wrong - Lorraine, in particular, can be deeply frustrating - but they're a group of girls who I've come to care deeply about over the course of the series. I love the way they've developed as characters, especially Clara, and their romances have been a lot of fun to read about. (And rather tense, given the crowds they move in - I was never quite sure whether everyone I'd grown to like would make it to the end of the trilogy alive or not...)

As well as excellent characters and a strong writing style, Larkin also manages to capture her time period wonderfully well, bringing to life the 1920s glamour, complete with the speakeasies, the big parties, and of course the flappers that the series is named after. In many ways it's a shame to see a series this good come to an end - I'd have loved another few books! - but Larkin provides us with a richly satisfying climax which does a great job of bringing closure to the various plot strands.

Superb - both the book, and the trilogy as a whole, are massive recommendations.

Jillian was kind enough to give me a great guest post about coming to the end of the Flappers series last week.
- July 15, 2013