(I read this book for free on NetGalley when the publishers made it available on 'Read Now' for a weekend.) 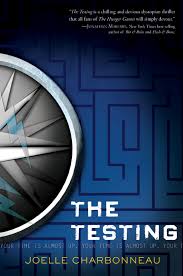 I'll break from my usual reviewing style of starting off with a plot summary here, for reasons which will shortly become obvious, and just start by saying The Testing is an interesting dystopian read, with a wonderful narrator, which I'd definitely recommend.

So, that plot summary. Some time after a war has ravaged the world, the post-war government has created a system of colonies. Taken from her home colony, along with a male teen as a love interest, our resourceful heroine is thrown into a situation where a bunch of teenagers are forced to try and kill each other in order to survive. With mutated animals to deal with, as well as the government she'd always thought was trustworthy but now is starting to doubt, can Katniss win out?

I meant Malencia, of course. Can't imagine why the name Katniss sprung into my mind there, can you?

Okay, to say this owes a lot to the Hunger Games would be putting it mildly. Having said that, there's been an awful lot of stuff published recently which owes a lot to the Hunger Games, and this succeeds where the vast majority of the rest has left me cold. The major plus points The Testing has are a fantastic narrator in Cia and the way we're introduced to her world, with the author doing her world-building with great skill. It also stands out as surprisingly brutal, even compared to many of the other dystopians out there today.

It's not five star - for a start, some character motivations seem seriously weird; why on earth are the government willing to wipe out so many promising youngsters? Additionally, there's a slow start which meant it took 50 pages or so to hook me (and another 75 pages or so to check I wasn't rereading The Hunger Games by accident.) It is, however, significantly better than most in the genre, has got one of my favourite heroines of the last twelve months, and features what's quickly becoming the Holy Grail of teen series for me. Yes, it has a cliffhanger ending that actually works perfectly - a few months after reading it, I'm still stunned by how brilliantly Charbonneau set up the next in the sequence.