Blog Tour: Celine Kiernan on Into The Grey

Celine Kiernan's Moorehawke trilogy is one of my favourite fantasy series of recent times - so even though I don't participate in many blog tours, when I was offered the opportunity to host a stop on her tour for new book Into The Grey, I jumped at it! A massive thanks to Celine for this post. (And to Hannah from Walker for arranging it!) 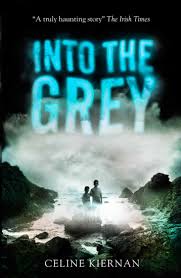 Into the Grey is a ghost story about twin brothers, Pat and Dom Finnerty, whose lives are turned upside down by the loss of their home and by a subsequent haunting. The book has quite a few chills, there's quite a bit of political history in it, much exploration of death and loss--but there’s also a lot of love and kindness in it, a fair few laughs and a lot of bravery. I thought I’d have a bit of fun with that side of the book on this blog tour, so these posts will be all about music! Why certain songs feature in the story, what they mean to me, what memories are associated with them etc . Into the Grey is set in the Irish seaside town of Skerries in 1974, all the songs featured are evocative to me of both that time and that (very real) place As you will see, they all speak very much to the story, too, and to the characters and the rather desperate situation with which they find themselves entwined.

NOTE: The seaside town of Skerries featured large in my childhood. Every year my aunts would rent houses there, facing out on what we called ‘the hurdy-gurdies’, and only a barefooted hop and leap to the beach. It’s all pretty much as described in the book: the house, the beach, the weather. The Rolling Stones ‘Sympathy for the Devil’  was a regular play on the tannoy system of the hurdy-gurdies, and on the jukebox of the pub where my much older cousins and my uncles played pool. For me, it’s not only steeped in happy memories, but is also evocative of the book’s themes of identity and misconstrued intentions—of knowing who you are, but no longer recognising the face in the mirror (or—as for some of the characters—of knowing who you were, but no longer recognising the history your country has painted of you.)

I don’t know what it was that changed Dom’s mind about the beach and made him take the harbour road. All I know is we were halfway to the rocks before it occurred to him. I was
swinging a stick around, swishing it through the air, trying to make perfect “Z”s in the sand, like Zorro. Dom was doing his best Mick Jagger impersonation, all hips and lips. The two of
us were singing “Sympathy for the Devil” and were just on the eighth go-around of the chorus when Dom let a whoop out of him and took a sudden curve for the steps. I immediately followed, his loping enthusiasm too infectious to resist.
“Where are we going?” I yelled.
He stopped at the top of the steps and turned to look back at me, his arms as wide as his grin, the wind whipping his hair and his army jacket and throwing sand into his teeth.
“Let’s take the harbour!”

Check out Sympathy For The Devil on Youtube, and take a look at the blog tour banner to the right to see where else you can catch Celine over the next few weeks!
- July 22, 2013