Thursday Thoughts: Book Review of The School For Good And Evil by Soman Chainani


(Note: The publishers provided me with a copy of this book in exchange for a fair and honest review.) 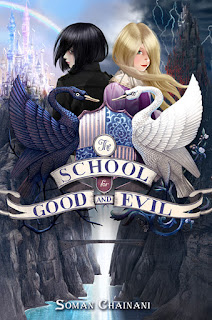 I thought this was an intriguing idea for a children's book and there's no doubt that debut novelist Soman Chainani has done a good job of world-building and plotting here. Agatha is a brilliant character, with Sophie not far behind, and I enjoyed reading about their adventures as they tried to cope with being in the 'wrong' school. I really enjoyed the interaction between the pair, and thought there were some interesting supporting characters as well. It also had a love triangle which I quite enjoyed. (Regular readers of my reviews will know that's rather rarer than actually meeting a fairy-tale character in real life!)

That said, it's not without its flaws. For a start, it's about 50% longer than it needs to be. Much of the book is fairly repetitive and at not far short of 500 pages it seems to overstay its welcome somewhat. Despite this, it's also got an ending which seems somewhat rushed. On the plus side, though, it's a clever conclusion which brings a real sense of closure to this adventure - and when I seem to spend a fair amount of time complaining about endings which aren't remotely satisfying, it's nice to be able to give a book credit for knowing the perfect place to stop.

Not quite as good as I was expecting it to be after the world-building got me hooked quickly, but it's still definitely worth a read if you're looking for a clever, funny fantasy tale. I'll certainly be on board for the next book in the trilogy!

Oh, one last thing - I love the cover; one of my favourites of the year so far. The manga-style characters capture both of the leads perfectly!
- June 13, 2013