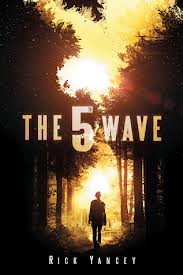 As far as she knows, Cassie could be the last human on Earth. Surely, she's one of the last few. After the first four waves of the Others - mysterious aliens who appeared and quickly laid waste to humanity - it's impossible for her to trust anyone she meets. Can she ever find the strength to rescue her kid brother?
I'm not a sci-fi fan at all, but picked this up because Yancey's Monstrumologist series is one of my favourites of recent years so I thought it was worth giving it a go. Thankfully, my gamble paid off, with Yancey providing us with an epic, and brutal, story full of thrills and huge moments, as well as some big twists - some of which I saw coming, but others which took me totally by surprise. It's an difficult read at times, especially when we see the lengths to which young children are pushed, but it's never less than completely gripping.
Yancey has always built tension really well, and this is definitely no exception - a couple of the later scenes, in particular, being nearly unbearable to read! There's an interesting romance - it's one I'd normally be annoyed at as it's veering towards the dreaded 'insta-love', but it earns a pass from me because the creation of this terrible world where every moment could be her last makes it easy to see why Cassie is quick to fall for somebody who shows her affection. The changing points of view also really add to the book - after a one page prologue, it's split into thirteen sections, alternating between several characters' points of view. These sections are mainly told in first person - by Cassie and others - although part of the story's in third. (I'm trying to be as unspecific as possible there, by the way, as it's definitely a book you don't want to read spoilers for!)
The minor problem I had with it is similar to the one I had with the first in Yancey's Monstrumologist series - it feels too long. In fairness, it's not an issue to the same degree as that one was, but I do think that at 50 - 100 pages shorter this could have been a masterpiece, rather than just very, very good. Having said that, the Monstrumologist has got better and better as the series progresses - with theIsle of Blood being even longer than this, but absolutely impossible to put down so I'm hoping this will too. If it improves from a starting point as high as this, then it has a fair chance of being one of the best series for quite some time.
Highly recommended!
- June 16, 2013