I'm thrilled to interview Jennie Wood, who wrote Flutter, one of my favourite graphic novels so far this year! 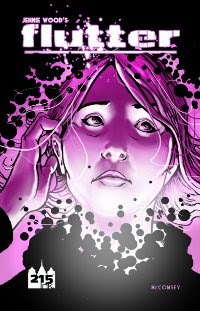 At a recent comic convention someone wearing a Rise Against t-shirt came up to me and asked what Flutter was about. After hearing the brief synopsis – it’s about a girl who shape-shifts into a boy to get the girl and the chaos that comes from pretending to be someone she’s not – Rise Against responded by saying, “That actually sounds like it doesn’t suck,” and bought a copy. That’s who I see when I close my eyes.

I always go back to Y: The Last Man. For me, it’s a classic example of authentic characters within a believable world and, therefore, anything is possible. The series is so wide in scope that it really brings home the endless possibilities of the format, just how much a graphic novel can do.

Fab pick - I'm only about halfway through the series as I get distracted far too easily, but it's an absolutely stunning book.

3. The art for Flutter is by the brilliant Jeff McComsey - how did the pair of you end up working together on it?

We were introduced through a mutual friend, Jorge Vega. I was taking a writing class at Boston’s Grub Street to flesh out Flutter. I’d written stuff in other formats, but not comics. Jorge taught the class and thought Jeff would be a great artist for Flutter. Jorge was completely right. From the very first sketches Jeff sent, he had a way of putting on paper exactly what I had in mind for Flutter.

4. One of the main themes of Flutter is identity and finding your place in the world. When did you first know you wanted to write comics?

The moment I picked up Y: The Last Man I knew I wanted to write comics and that Flutter had to be told in that format. I’d had the idea of Flutter for a while, but no format I had worked with seemed right for it. I wanted to show the shape-shifter so the novel format felt too static. When I tried to picture it as a film or TV show, all I could see were cheesy special effects. So when I read Y: The Last Man, I saw how I could show the story of Flutter as a graphic novel. I’d read comics all my life, but something just snapped into place while reading that series. And since then, I’ve been having a blast writing comics. I still write in other formats, but now, every time I work on a comic, it feels like coming home.

5. I notice looking at your website that you're at several conventions later this year - what's your favourite thing about appearing at conventions?

The sense of community at comic conventions just blows me away. There’s this shared love of comics and pop culture at conventions that is just unlike anything anywhere else. I grew up reading comics. Science fiction and comics provided a fictional world for me as a kid that made the real world bearable. And I feel like that shared appreciation for the fictional escape that comics provides is so present at conventions. I’ve been to writer’s conferences and other types of conventions, but no matter how great the organizers of those are, there’s always this sense of competition and desperation to get published or to be noticed. At a comic convention, it’s just a completely different vibe. Everyone is there to celebrate this beautiful fictional world that comics give us.

6. Would you consider writing for either of the 'Big Two' comic publishers? If so, which character would you most like to write for?

I think anyone who enjoys writing comics has to think about writing for the ‘Big Two’ at some point. There are so many great characters and I still believe there’s a lot of ground to cover. Of course, I’d love to tackle anything involving X-Men, but the character I’d most like to write for is the Hulk. I’m fascinated by the triggers that we have, that switch that gets flipped and sometimes it seems like it’s out of nowhere, but next thing you know, you’re in a full blown rage, losing your mind about something. I’d have a lot of fun exploring those triggers – internal, external, and emotional – with the Hulk.

I've never been a Hulk fan, but Waid's current run has absolutely blown me away - I'd love to see what you could do with him! And I'm a huge X-Men fan! Great picks.

7. Do you listen to music when you write? If so, what was the soundtrack to Flutter?

I always listen to music when I write. And music was a huge influence on Flutter. All the chapters are named after songs. Saffron’s name comes from a song. The main thing I listen to when writing Flutter is Florence and the Machine. Their sound is so huge and dramatic, dark and romantic – a perfect match for Flutter.

8. If you could host a dinner party, which six characters, writers or artists would you invite to it?

I love this question! Wow. I feel like a kid in candy. Let’s have a theme dinner party and invite characters along with the artist or/and writer who created them. Number one on my list is Saga’s The Will because he’s my huge fictional boy crush right now. Love him. And let’s invite the artist who draws him, the extremely talented Fiona Staples. Of course, we must have Brian K. Vaughan. Hopefully The Will won’t still be too upset at them for what they did to his love, The Stalk. Ramona Flowers from Scott Pilgrim is a must have because she’s my all-time crush in comics. And if she’s “played by” Mary Elizabeth Winstead at the party like she is in the film, well, that will make this the most amazing dinner party ever. We’ll have Ramona’s creator Bryan Lee O’Malley there as well. Finally, let’s invite Lois Lane because what’s a party without someone to write about it?

Fab picks! Saga is on my list of books to read when I get round to it. Vaughan's one of my favourite people in comics, so would be great to have him there.

9. What comics or graphic novels are you reading at the moment?

I’m loving Gail Simone’s The Movement. I can’t wait to see where she takes it. And I’m really enjoying the “all-girl” X-men by Brian Wood and Olivier Coipel.

Haven't read either yet but looking forward to getting my hands on both of them fairly soon.

10. What's next for Jennie Wood?
I recently finished my first YA novel, A Boy Like Me. Now I’m working on a new graphic novel with my writing partner, Kelly Ford. It’s about a woman who was frozen before an epidemic and now she must find her lover, the one person who can stop the virus from infecting her. And more Flutter is on the way, too!

Sounds fantastic! Can't wait to read them both.