Sheena Wilkinson, author of TAKING FLIGHT, GROUNDED and TOO MANY PONIES, is an author I've been meaning to read ever since her FRIENDS IN THE FOURTH was published by Bettany Press. I was thrilled to get the chance to interview her! 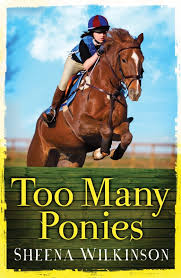 I don't really do that. I close my eyes and see my characters. Obviously, I am more aware of a readership now that I have had several books out, but I think my duty is to the characters and story -- if I get them right, they'll find the right readers. Like all writers, at some level I am writing the book I want to read.

2. Your novels so far have all involved ponies - are you a keen rider yourself?

I was a horse owner for about ten years, until recently, but my pony and I parted company at Easter. I've actually written a lot NOT about horses, but -- so far -- the horsey ones are the ones that sold! There are lots of other things I want to write about and my new novel (work in progress) has no horses at all.

3. Who or what inspired you to become a writer?

I was an obsessive reader as a child -- still am. And as soon as I realised that you could write your own stories down I started doing so. I think the whole world of books was just one I wanted to enter on as many levels as I could. It was always my dream to be a 'real' writer.

4. In addition to your novels, you've written several short stories - including several award-winning ones. What are some of your favourite shorts by other authors?

This is a terrible confession -- I love writing short stories but I don't read as many as I should. I like to get really involved in something which is why I prefer novels. That said, I absolutely love Katherine Mansfield for her subtlety and deftness.

5. As well as your fiction, you've also written a book, Friends in the Fourth, published by the wonderful Bettany Press, about girls' school and college friendships in 20th century British fiction. Who are your favourite fictional friends?

What a great question! How long have you got? That's a good way to put it, too, because for me in reading and writing it's so much about the people. I could give you a very long list of the characters I think of as friends, but to pick out a few besties -- Jo March, Elizabeth Bennett, lots of the Chalet School girls; the Swallows and Amazons, Petrova Fossil, the Marlows (in Antonia Forest's amazing books) -- and then there's the boys --- KM Peyton's the go-to woman for writing boys I had crushes on as a teenage readers. Poor old real-life boys didn't stand a chance.

Some fab picks there! I love the Chalet School and Swallows and Amazons books, as well as Jo March and Petrova Fossil. AF is one of the few 'big name' GO authors I've never read, definitely need to get round to it sometime!

6. On that note, which children's stories of the 20th century would you recommend to a modern reader? (I loved several series when growing up myself but tend to think some have held up a lot better than others.)

Another great question. I'm a big fan of school stories, but I think today's children might not respond to them in quite the same way. Ditto Swallows and Amazons. KM Peyton -- again -- hasn't dated, and I'd recommend her books about Ruth, Jonathan, Peter, Pennington, etc. to anyone, as well of course as Flambards. Wonderful characters, stories and writing.

Agree that in many cases the school stories aren't quite the same for today's readers. I read Flambards recently and absolutely loved it, fab pick!

7. You recently won both the CBI Book of the Year and Children's Choice awards for Grounded, to add to the 2 CBI Awards you won for Taking Flight - congratulations! When you started writing, did you ever expect your books to be as well-received as they have been?

Thanks! I was thrilled to win the Book of the Year this year, because after Taking Flight did so well I was worried about the whole difficult second novel syndrome. I didn't want to be seen as a one-trick pony! I felt myself that Grounded was a strong book, but you never do know how readers will respond. Awards don't make you a better writer, but they do make people notice you more, and being published by a small (and wonderful) Irish publisher, I need all the attention I can get! It's been a long apprenticeship for me, and I'm now grateful for that, because I get to look like an overnight success when in fact I've been practising in secret for years. Heh heh.

I'd ask Shakespeare how on earth he managed to have such profound insights into so many areas of human nature, but he probbaly wouldn't be able to answer.

9. Do you listen to music when writing? If so, can you share the soundtrack to one of your books?

I love music, and I'm a singer, but on the whole I don't listen much when I am actually writing -- I find it distracting. If I do take a notion for listening, I find that music which meant a lot to me as a teenager helps get me into the right frame of mind for my teen characters, even though it's very far from what they'd listen to themselves. So -- The Smiths, Big Country, David Bowie, Bruce Springsteen, Leonard Cohen -- all very retro!

Very retro but very cool, I love Bowie! And my parents are going to see Cohen later this year, hugely jealous of them!

10. What's next for Sheena Wilkinson?

I've been fortunate enough to have been awarded a Major Award from the Northern Ireland Arts Council, which will allow me to take at least a year off my teaching job to write -- and meet readers -- full time. I am so excited because for the last two years I have written books back-to-back while teaching 36 classes a week and I am knackered! My new novel, Too Many Ponies, for 8-12s, came out recently, and I am writing another YA -- very psychological and hopefully very mysterious, but firmly in the real, gritty contemporary world I love to write about it. And I have an idea for the one after that....

If I wasn't in awe of you for being an author before, I definitely would be for doing it while teaching that many classes! Looking forward to your new YA, which sounds fab!

Very best of wishes for the future, Sheena - thanks so much for taking part.


Sheena can be contacted on Twitter. Her books are published by the brilliant Little Island.
- June 14, 2013