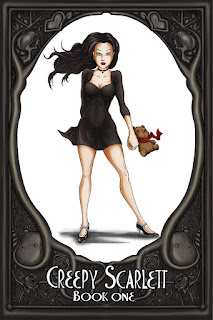 In 1919, a samurai brings the Emerald of Lucifer to the town of Sunnyville to give it to the pastor there. On being told that the pastor is dead, he leaves the emerald with a girl called Scarlett. When The Order of the Red Sun turn up to try to take it, though, the samurai and Scarlett stand together to fight them. But just who is Creepy Scarlett?

To tell you any more than this would be going much too far into spoiler territory, but Scarlett is a winning creation who I'm looking forward to seeing more stories about. Both parts of this book - initial story The Emerald of Lucifer and issue 2, As White As Snow, which serves as an origin story - are highly recommended and make the central character a fascinating one. She's someone who initially appears to be a kooky character and this could have been something of a one-note joke but she's fleshed out brilliantly through the course of the 2 issues and gets to show that she has the skills to protect the emerald. I particularly liked her relationship with the pastor, and her cuddly toy Mr Ted. Additionally, the villains are more intriguing than most in comics I've read recently - especially Pumpkinhead.

I normally prefer colourful art but while the first issue of the book is good to look at, it's the second one which is really stunning. Mainly black, white and grey, with just touches of colour - Scarlett's blue eyes, Mr Ted's red scarf, and a few other items - it really stands out and shows off Felipe Sanhueza Marambio's pencils to the best effect possible.

Strong recommendation as an excellent start to the series which definitely left me wanting more. At just $1.99 on DriveThruComics it's an absolute bargain and I hope lots of people pick this one up. (If you prefer printed comics, I believe it'll be up on IndyPlanet soon.)
- June 27, 2013