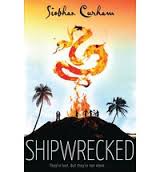 Grace Delaney and her friends from her dance school are really excited to have the opportunity to perform on a South Pacific cruise ship. But when a storm hits and leaves them stranded on an island, they're left fighting to survive - and fighting with each other, as tensions build when they start to panic about whether they'll be rescued. As if that wasn't bad enough, the island has a dark secret - will they learn it before it's too late?
In the advance publicity for this book, it's being billed as Gossip Girl meets Lost, and the mixture of sexual tension, mysterious island setting, and weird happenings mean it's a pretty good comparison. Curham's characterisation elevates it past the 'guilty pleasure' level of Gossip Girl for me, though, with an interesting group dynamic between the teens as they're trying to survive and find a way of being rescued. I'll even forgive the insta-love element, something that normally really gets on my nerves, because Curham makes Grace and her love interest's feelings for each other seem believable given the possibility of impending death. Speaking of which, he's a seriously hot love interest who will no doubt have many readers swooning over him! I also really liked most of the other teens, particularly Bella and The Flea, although some of the posher students didn't feel quite as well-rounded.
It's an atmospheric read, with lots of strange things happening, and Curham builds up the magical elements into the book well, starting from really early on when Grace burns a list and ends up with the word danger being the only thing not to burn. My only slight gripe would be that for all the creepy atmosphere, it's yet another book to start off a series which seems to end just as things get really interesting. Having said that, I'm definitely looking forward to the next in the series.
Recommended as a good read, and I think this has the potential to be a brilliant series.
- May 26, 2013