Saturday Special: Interview with Will Hill 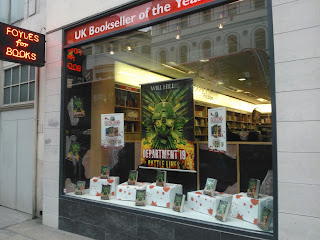 As readers may know, one of my very favourite current series is Department 19, by Will Hill. I was absolutely thrilled when I managed to get an interview lined up with him - huge thank you to The Bookbag for arranging it!


Will Hill: People who like a good story, who don't mind being scared, and who have strong stomachs!
To be honest, I don't see a particular person when I wonder about who reads D19 – I see lots of them. Some of the marketing has positioned them as books for boys, which is understandable given the action and the military stuff, but I've never thought of them that way, and the emails and tweets and Facebook messages I've received suggest that they are read by both boys and girls, and by men and women, of various ages. Which is awesome, obviously.

2. Department 19 is inspired by Bram Stoker's Dracula, while Frankenstein is perhaps the most intriguing character. (For now - I'll have changed my mind by question 7!) Are there any other classic novels that you'd like to see inspire modern teen novels?
WH: It's an interesting thought – I've had D19 fans ask whether I'm going to bring in Dr Jekyll and Mr Hyde, The Picture of Dorian Gray, The Invisible Man, and many others! Beyond the horror genre, Rick Riordan is doing a fine job of integrating the classic myths and legends into his various series, and there have been lots of re-imaginings of Austen, Dickens, Brontë, etc. I think looking to the classics can be a great way to inspire new stories, as long as the author's ambition is to build on them and create something new, rather than just go over the same ground and try to associate themselves with something iconic.

3. I loved the animated comic strip, with stunning illustrations from Tom Percival, posted on your website a few weeks ago, and am looking forward to seeing the others. Is there any chance the main series will get a graphic novel adaptation?
WH: You never know! I'm a huge comic book fan, so that would be something I would be delighted to see happen, but any type of adaptation is incredibly hard to get off the ground. I had a lot of fun writing the animated comics that we produced for the release of Battle Lines, and what Tom has done with them is absolutely incredible – they've been getting a great response, so I would think they'll be something we would seriously consider doing again in the future.

4. Speaking of adaptations, would you like to see Department 19 filmed? Any thoughts on who could play any of the parts, if that was to happen?
WH: I get this question a lot, and to be honest, I'm always in two minds about a film adaptation. On one hand it would be amazing to see the physical side of D19 realised – the technology, the locations, the uniforms, and the world of the vampires – and watch actors playing characters I made up. On the other, it would be very weird, as I can be a tiny bit of a control freak :) One of the best things about writing novels is the lack of compromise that is required, in terms of scale and scope. The budget is essentially unlimited – I can do anything I want as what I'm describing only takes shape in the imagination of the reader. A film version of D19 would need to be very, very expensive to do it justice – there would be digital effects in almost every frame. We've had a lot of meetings with interested parties, and I suspect that at some point someone will try to make it happen, but I won't be holding my breath…
As far as casting is concerned, there are a few people I've always seen in my head when I'm writing certain characters: Paddy Considine as Julian Carpenter, Gary Oldman as Henry Seward, Rachel Weisz as Marie Carpenter. The one that usually surprises people is Colin Firth as Frankenstein.
Some great picks there - I think Firth as Frankenstein would be amazing!
5. I was thrilled to see the amazing Department 19: Battle Lines display in the window of Foyles when I visited London last week! Did you ever imagine the series would be as successful as it's turned out to be?
WH: It's all very weird. I don't really know how successful it is, as I tend to stay away from the sales numbers – my view tends to be that as long as my publishers are happy, then I'm happy. But when I was writing it, I never had any idea whether it would ever even see the light of day, let alone whether anyone would ever read it. So if it's selling well, that's awesome. But what's far more awesome, and endlessly humbling, is realising that there are people out there actually spending their money and time on something I wrote. Interacting with fans of the series is the best part of the whole thing – reading their thoughts, answering their questions, enjoying their theories – and it's been lovely to hear how many of them were eagerly awaiting the publication of Battle Lines.

6. In addition to the three superb novels so far released in the Department 19 series, you recently released the Department 19 Files, 3 e-books set in the Department 19 universe between 1917 and 1919. I've read, and really enjoyed the first one, and am about to read the others - and am looking forward to more in the future, hopefully! Do you think the internet and the growth of e-readers has led to more opportunities for authors to write short stories like this?
WH: Definitely – before the rise of ebooks, the only places I could have put the D19 Files would have either been in the backs of the novels, or in their own collection once I had written enough of them to warrant the printing costs. I love printed books, so I’d still love to do that one day, but for now, releasing them digitally allows me to put them out there quickly, and lets readers pick the ones they think they might be interested in.

7. And speaking of short stories, you also wrote one for World Book Day, featuring Larissa, perhaps one of the most intriguing characters in the series. (Apologies to Frankenstein; I did say I'd have changed my mind by now though!) How did you get involved in writing something for World Book Day?
WH: I don't know exactly how it came about – World Book Day are in contact with publishers all through the year, so the first I knew of it was when my editor asked me if I had a story that would work for the YA app that they were going to be doing for the second time this year. I was delighted, even though it was going to need writing in the same period as we were finishing the edit of the third D19 – I actually wrote it in a six-hour blitz the day after Battle Lines was sent off to be typeset.
Larissa is one of my favourite characters, and I'm delighted she seems to be so popular with the D19 audience. When I was thinking about what to do for WBD, a story about her on her own, without Jamie or Kate or Matt, quickly presented itself, and by the time I came to write it I was desperate to get on with it.

8. I love the way your books cut between so many different situations and plot threads, but it seems like it must be incredibly hard for you to keep track of them all as an author! How much planning do you do before you start to write your first draft?
WH: When I started writing Department 19 I knew how it started and how it ended, but basically nothing else. I just trusted that the story would unfold itself as I was writing it, and luckily (after a few detours and wrong turns!) it did so – the historical sections appeared pretty much fully formed, and the narrative gradually fell into place. But about halfway through, I realised that I was going to have to work out the history, all the family trees, and the organisation of the Department, so I stopped in the middle for about a month and did the bulk of the research and planning.
For The Rising, I planned a bit more, particularly with reference to the story elements I left open at the end of the first book, and for Battle Lines I did even more – the series has well over a hundred named characters now, along with all the history, all the geographical range, and all the different threads that will eventually all need bringing back together. But even now, as I'm starting book four, I'm still reluctant to plan everything too tightly – I have a long list of everything that is active from the earlier books, where all the characters are and what they are doing, and I know what the main narrative threads are going to be. But I'll be very disappointed if I don't come up with some new (and hopefully better) ideas as I write it – I like to make sure I have room to change things.

9. If fans of Department 19 have read the entire series so far and all of the short stories, what should they seek out to tide them over until book four is out?
WH: Off the top of my head, the His Dark Materials trilogy by Philip Pullman, the Mortal Engines quartet by Philip Reeve, the Chaos Walking trilogy by Patrick Ness, The 5th Wave by Rick Yancey (when it comes out!), The Reluctant Assassin by Eoin Colfer (as well as the entire Artemis Fowl series, obviously!), In Darkness and Hostage 3 by Nick Lake, Maggot Moon by Sally Gardner, the Gone series by Michael Grant, and everything by Roald Dahl – I don't care if you've read them all before, read them again :)

10. What's next for Will Hill?
WH: Right now, D19 book four – that'll occupy me through the spring and summer, then I'll normally get a couple of months to work on other projects while we're editing and polishing. I signed a new contract with HarperCollins last year which is for the last two D19s and something else afterwards, so I'm working on a few ideas for what I might do after the D19 series is wrapped up. One thing is for sure – it will be a standalone, rather than the first in a new series :)