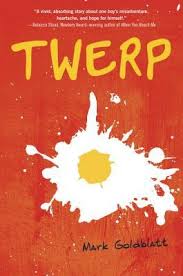 Julian Twerski did something bad. So bad, that it got him suspended from school. When he returns, his English teacher asks him to write a journal about it, in exchange for getting out of doing a report on Shakespeare. Julian reluctantly accepts - but would rather be writing about sending love letters for a friend, blowing up fireworks, or pretty much anything else except telling Mr Selkirk about what he wants to hear.

For the first half or so of this book, I merely liked it. It seemed to be almost more of an interconnected bunch of short stories than a novel in many ways, most of which would have worked well on their own - I can see this being massively popular as a book for teachers to use in English lessons in older primary and younger secondary school classes. It was only when we'd got past the halfway point that I really fell in love with it, as I realised just how cleverly Goldblatt had tied all of the journal entries together into a beautifully-told coming of age story. In fact, I enjoyed it so much that on finishing it, I reread it almost immediately and found it even better the second time around.

Narrator Julian - struggling to cope with his guilt over the event which got him suspended, his relationships with his friends, and his worry that he may no longer be the fastest kid in school - is a brilliant central character. Just as good, though, are the supporting cast, particularly fast-talking Lonnie and Julian's older sister Amelia. As well, the setting of Queens in the 1960s is brought to life incredibly vividly.

Bullying, peer pressure, power, responsibility and growing up are all handled perfectly here, while Goldblatt's writing style captures 12-year-old Julian's voice superbly. I think this could be one of the biggest hits of the year, appealing to children and adults thanks to the great writing, funny and touching story, and the nostalgia for the sixties.


(I'd like to thank the publishers for allowing me to read this book via NetGalley in exchange for a fair and honest review.)
- May 25, 2013