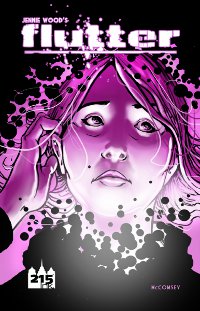 When fifteen-year-old Lily moves to yet another new town, she falls for a girl who isn't interested in her. Lily, though, has a trick up her sleeve - she's a shapeshifter. She turns herself into a boy so that she can have a chance with Saffron. As Jesse, she starts to build a new life for herself at school -can this 'boy' get the girl? Additionally, why is Lily so resistant to any sort of harm, and who are the strange people who are trying to find her?

This is rather awesome. It's sweet, tender, thought-provoking, exciting, and carries a strong message about being true to yourself and finding your own place in the world. In addition, it's unpredictable and has some lovely artwork from Jeff McComsey. His fairly muted palette fits the story perfectly and his teens look realistic (especially in the way they dress), while his facial expressions are particularly strong - I love the way he draws Lily's father when he's confused, which seems to be quite often! The artwork and writing meld together in the way they do in the very best graphic novels to give us some superb characterisation here - as well as Lily's father, as mentioned, Lily herself is a wonderful central character, sympathetic even when she's clearly being extremely manipulative, and the other teens she's friendly with are also portrayed well. The action plot, with people chasing Lily and her dad and explosions and guns, is handled skilfully, but it's the gender issues at the centre of everything which make this one really stand out as one of the most unique graphic novels I've read.

I'm definitely looking forward to the next volume of Flutter, and this is a high recommendation from me - especially as it's available on Comixology at the bargain price of £2.99. (I think that's the right price - unfortunately I don't think there's a way to check UK prices once you've bought it.) If you still need convincing, get over to the website and check out the preview of the first part.