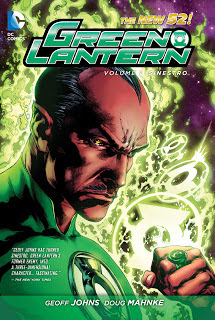 I've never been a Green Lantern fan - I've tried the series a couple of times in the past but seem to have picked bad times to give it a go. However, I've heard some good things about DC Comics recently so wanted to try a few of the New 52 books, which relaunched all of the publisher's ongoing monthlies, and this caught my eye.

First things first - this is something of a 'soft' relaunch, in comparison with a few others which served as origin stories. This plunges us right into the action, with the Guardians, creators of the Green Lanterns, giving back a power ring to Sinestro. For those even more unfamiliar with the series than I am, the Guardians are immortals from another planet, while the Green Lanterns are chosen from across the universe by these immortals and given rings which turn them into superheroes. The two main characters in this book are Sinestro - Green Lantern turned supervillain turned Green Lantern again - and Hal Jordan, former Green Lantern turned normal guy. At least until Sinestro, his bitter rival, turns up and makes him an offer...

Geoff Johns is generally acknowledged as one of the best at writing Green Lantern, and this definitely doesn't disappoint! We get some fabulous action, wonderful humorous exchanges between Sinestro and Jordan, and intriguing hints being laid down for future issues. There's a good mix of the aforementioned action with slower stuff - the comedy early on as Jordan tries to adjust to life after being a Lantern is really well-written, as is the romance element. I think it's a good starting point for new readers - everything you need to know is easy enough to pick up from the first 12 pages or so.

In addition, I loved the art - by Doug Mahnke on the first five issues and guest artist Mike Choi in the sixth. Both have brilliant, although very different, styles. Mahnke's work is some of comics' finest, especially when it comes to some stunning action scenes and beautiful full page spreads. Choi's is more realistic but equally great to look at. All in all, it's an extremely visually appealing comic.

Highly recommended as a great book for readers new to DC in general, or Green Lantern in particular.