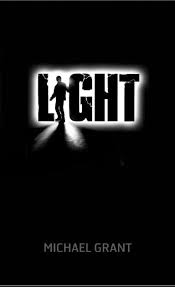 The dome has become transparent. The teens, and kids, in the FAYZ, are still trapped inside, but now they can see out - and their parents, and others, can see in. With interviews taking place by primitive methods, the outside world are starting to find out just how violent life has been, and this is just adding to the worries of Sam, Astrid, and the rest. How will the world receive them when they get out - or rather, if they get out? The gaiaphage, having taken human form as Caleb and Diane's rapidly-maturing daughter, is as evil as ever, and with Drake as its servant, is destroying anyone in his path. Can those left alive inside the FAYZ survive?

I always think that by this point in a series, a book is pretty much review-proof, anyway, especially when the quality of the series has been as consistently high as it has in this one. Whatever I said about this one, I'd be unlikely to put anyone off reading it if they'd enjoyed the first five. Thankfully, no need to put that theory to the test - because this is stunning stuff, perhaps Grant's best novel yet in the sequence. It's brutal, as his fans have come to expect by now - nothing quite as horrifying as a couple of the scenes involving Penny earlier in the series, but there are still some terrible deaths, one of which nearly had me throwing my copy at a wall in frustration, despite this being the most expensive book I've actually bought for ages. (I was 2nd in line to borrow it from my local library, but I couldn't wait even a day longer to read it and grabbed it in town a few days ago.)

I think the most impressive thing about the series, as a whole, is just how realistic the characters and their relationships feel. Yes, there's people who can shoot light out of their hands, telekinetics, and healers, but as out of the ordinary as the powers are, the teens wielding them seem utterly believable. As well, I love the way the non-powered teens have played such a big part in the series, and the character development of the entire main cast over the six books.

It's completely unpredictable - I had absolutely no idea how on earth it would end, but Grant brings things to a stunning conclusion.

Huge recommendation, and the series is up there with Department 19 as the very best of recent years for teens.