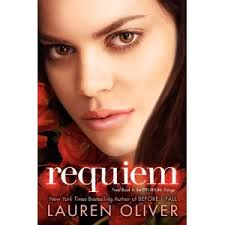 Warning: Spoilers for Delirium and Pandemonium below!
Out in the Wilds, Lena is now trying to cope with the return of her first love Alex along with her feelings for Julian, but these relationship issues take a backseat as life becomes very dangerous for her, and everyone else. Back in Portland, her friend Hana is set to marry the man who will become Mayor - a perfect pairing, surely? While both girls have changed a lot since the start of book one, the biggest changes are still to come...
The strongest parts of the Delirium series, for me, have always been Oliver's gorgeous writing style and the character development of narrator Lena. With that in mind, I was initially surprised when I realised Lena's old friend Hana - who played a big part in Delirium but wasn't involved much in the second book - was narrating part of it. While it seemed a bizarre idea to switch from one narrator to two at this point in the series, it actually works stunningly well, giving us an insight into the life of someone who's been 'cured'. The main reason it works so well it that, like Lena, Hana has an exceptionally strong voice, and I was completely captivated by both of their stories.
We also get a memorably nasty villain here, evil enough to make your skin crawl, and a staggering amount of action in what's a comparatively short novel, at least in contrast to series like Twilight where every new book got longer and longer. This is a relatively quick, and completely engrossing, read which I didn't put down once between starting and finishing it. Oh, and as well as the main novel, there's a bonus story told from Alex's point of view, which is well worth reading.
What we don't get - thankfully, from my point of view! - is much of the love triangle which I'd been expecting to take centre stage. While both Alex and Julian play a part, and Lena still has feelings for them, rather than concentrating on the romance the book spends far more time on the action, and we see Lena complete her transformation from the meek girl desperate to receive the cure for love who we saw at the start of the first book into a seriously awesome heroine. It's a massive shift from the priorities of book one, but it really does pay off.
As for the ending... wow! I can see this one really dividing people - it's an open ending which definitely leaves a fair bit to the imagination, but for me it was perfect. It ended on just the right note, wrapped up enough to be truly satisfying, and the last few paragraphs, in particular, were completely heartbreakingly beautiful. Massively recommended, and overall this trilogy go from being a fairly strong recommendation to a huge one, as one of my favourite teen trilogies of recent years, on the strength of this concluding volume.