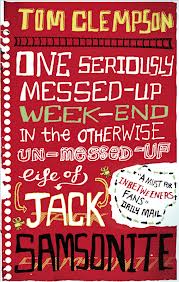 Slight spoilers for One Seriously Messed-Up Week: in the Otherwise Mundane and Uneventful Life of Jack Samsonite, although I think I've done a better than usual job of avoiding them. Anything I refer to here was given away in the first page of that book, so you can probably read this review even if you haven't read it. (Although really, if you're planning on reading the book, you should definitely check out that one first!)
Two years after the messed-up week described in the first Jack Samsonite book, things aren't all that different for our hero. He's still trying to get together with a girl - despite having ended book 1 in bed with someone, things didn't go as he would have wanted after that. He's also struggling at school again, and it's even more important than his attempts to pass his GCSEs were. This time, he needs to get into film school. He has a weekend to make a film, and he needs a girl to kiss, and at least one enemy to fight.
On the plus side, he's not struggling for enemies...
I read this one straight after reading Tom Clempson's debut novel, the first in the Jack Samsonite series, and it's another funny, crude, but ultimately warm-hearted slice of life for a reasonably typical teenager. Jack himself is the main strength of the series. He's sweet (well, as sweet as seventeen-year-old boys generally get), good-natured, and if his overactive sex drive and a tendency to insert his foot neatly into his mouth gets him into some sticky situations, he's normally got his heart in the right place. It's clear from his narration that the three girls who are potential love interests here are, in his opinion at least, way out of his league, but it's easy to see what they see in him - even if some of his appeal is clearly more in a 'little boy lost' way than the 'sex god' status he's hoping for! In addition to the girls, who are each well-described with their own personality (and a lot more common sense than the title character!) it's great to see the change in Jack's friend James in the two-year gap between the books, and the changed dynamic of their friendship is interesting reading.
Being completely honest, I didn't think it was quite as enjoyable as the first in the series, perhaps because that felt so wonderfully fresh and it's always going to be hard to recapture that originality in a follow-up. The sheer amount of toilet humour, especially when Jack, who struggles to use public toilets, has to leave home in the morning without getting a chance to use the bathroom properly, might also put some people off. It's still a definite recommendation though, thanks to Clempson's easy to read writing style, the wonderful central character, and a clever, unpredictable plot with lots of twists and turns. Oh, a warning - this series isn't one to be read on public transport, as I found out to my cost after numerous fits of giggling!
- April 21, 2013