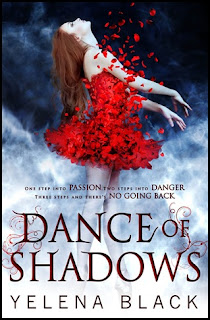 Vanessa is just one of many new students at the New York Ballet Academy - but while they're all trying to become the best dancer, she has her own reasons for being there. Three years ago her older sister disappeared from the school, and she's determined to find out what happened to Margaret. Can she find out? And will the two boys taking an interest in her, charismatic Zeppelin and incredibly intense Justin, help or hinder her search?

I’m not even sure how to start reviewing this one, because my head’s still spinning after reading it. I’ve gone back and forth on whether to mention that it’s paranormal – because apart from a prologue which I initially thought might be a dream sequence, it only becomes obviously paranormal fairly late on – but I think I have to, because if you’re not interested in that genre then the last quarter or so will be well out of your comfort zone as things get increasingly magical.

So, if you’re looking for anything remotely realistic, don’t go near this. If you’re on board for a breathtakingly, rather brilliantly, bonkers read, grab a copy and I doubt you’ll be able to put it down. It’s thrill-a-minute stuff, with mysterious characters, a ballet academy with a sinister history, and a complete lack of any sense of restraint which is to be commended – if this plot had been toned down to be even vaguely sensible it would probably have collapsed, but the sheer insanity keeps it going.

Also, despite the crazy plot, Black’s writing style is excellent – at least, it works perfectly for this book. Reading my favourite bits out loud to my dad while he was watching a football match on TV, I nearly lost my voice – virtually the entire last half a dozen chapters deserve to be quoted, and it contains a really strong contender for ‘best made-up word of the year’. (Sorry, telling you what that is would be too spoilery even for this review.)

The characters are slightly sketchy, to be honest, but while this is normally a major problem for me, I was far too busy trying (and failing miserably) to guess what on earth would happen next to worry about that.

I have no idea where on earth Yelena Black will take the series with the already-announced second book – but I’m definitely looking forward to finding out. Recommended if you’re looking for an incredibly entertaining and really unusual read.
- April 28, 2013