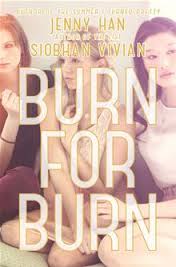 Kat wants revenge on her ex-best friend, who now taunts her whenever they cross paths. Lillia wants revenge on the boy who's started treating her little sister as more than a friend. Mary wants revenge on the boy whose cruelty led to her leaving Jar Island for years, only returning now. Individually, they may not be able to do much - but as a trio, they're sure they can wreak vengeance on those people who've wronged them. Just how far will these three 17-year-olds go?
It took me a while to get into this one - I didn't think Kat, Lillia and Mary really developed their own voices until I'd read a couple of chapters with each as a narrator - but by the time I'd got a third of the way through or so I was really enjoying it. Once they develop their voices properly, the central trio are intriguing characters, while Han and Vivian also do a very good job of turning the people they target for revenge into believable characters, raising the question as to whether they deserve everything Kat, Mary and Lillia want to put them through.
It's pacy, cleverly-plotted, and thought-provoking. Having said that, it's also a little confusing at times, and I'll break with my usual practice to provide something of a spoiler here as I think it's probably something that will colour people's views on the book.
There's a paranormal element which is hinted at a couple of times, but only becomes completely apparent towards the end. It didn't put me off, but it certainly took me by surprise.
I also thought the book suffered from a rushed ending which worked well in setting us up for the sequel, but didn't give us a particularly satisfying conclusion to this one. Despite this, I'd still recommend it to people looking for an entertaining read with more depth than first meets the eye, and I'll look forward to the rest of the series.
- April 07, 2013